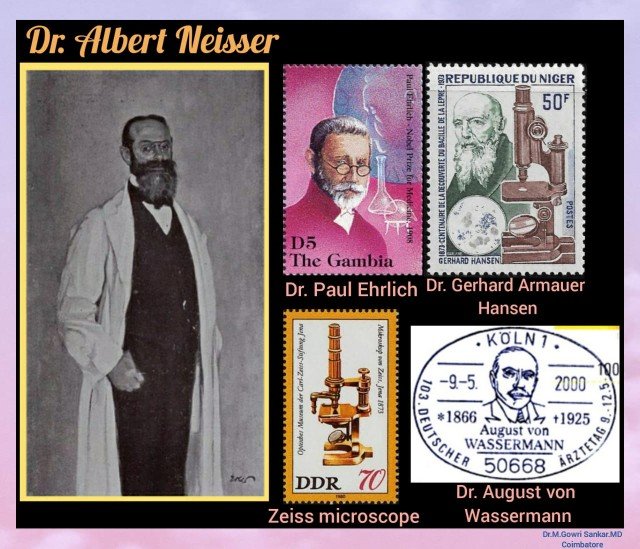 🔹Neisser was born in Poland and his father was a physician. Neisser did his schooling along with another great name in the history of medicine – Paul Ehrlich.
🔹Then, Neisser enrolled to study medicine at the University of Breslau and graduated in 1877.
🔹After his studies, he joined to work as an Assistant to the Dermatologist. There he concentrated on sexually transmitted diseases and leprosy.
🔹He further conducted his research on pathogen for gonorrhea but it took two years of time to obtain experimental evidence .
🔹Thereafter, he made an effort to make use of a new Zeiss microscope with oil-immersion system. He was the first who observed the “micrococcus.” Later, it was renamed as “Gonococcus” by his friend Dr. Paul Ehrlich.
🔹He published his discovery of causative organisms of Gonorrhoea in 1879 at the age of 24 years. It became a milestone in elucidating the aetiology of venereal diseases.
🔹Soon after his discovery, he made a research trip to Norway in 1879. There he worked with the Norwegian physician Dr. Gerhard Armauer Hansen.
🔹Thereupon, he successfully stained the Lepra bacilli from the tissue samples of the patients of Dr. Hansen’s. Thereby, Dr. Neisser became the co-discoverer of the causative agent of leprosy.
🔹Afterwards, Dr. Neisser collaborated with a German bacteriologist Dr. August von Wassermann, and developed the famous diagnostic test for detecting Treponema pallidum infections and named as Wassermann test.
🔹He then collaborated with Dr. Paul Ehrlich and discovered the first chemotherapeutic agent Salvarsan for syphilis in 1910.
🔹His Eponyms….
🔅 Neissericeae – A family of bacteria that are spherical, gram-negative, nonmotile. The two genera are Neisseria and Veillonella.
🔅 Neisseria Catarrhalis – Species of Neisseria found in catarrhal inflammations of the upper respiratory tract.
🔅 Neisseria haemolytica – An obsolete term for Gemella haemolysans.
🔅 Neisseria meningitidis – Species causing epidemic cerebrospinal meningitis, usually called as meningococcal meningitis.
🔅 Neisseria sicca – Species found in mucous membrane of respiratory tract. Occasionally may cause bacterial endocarditis.
🔹Later, he became one of the Founders of the German Dermatological Society in 1888 and German Society for the Fight Against Venereal Diseases in 1902.
🔹Moreover, Dr. Neisser is well remembered for his discovery of the Gonococcus. Also, well recognized for his work on Leprosy and Syphilis.
🔹In fact, the most significant advances in the diagnosis and treatment of venereal diseases were raised in the late nineteenth and early twentieth century. Undoubtedly, one of the greatest names in this pioneering work was Dr. Albert Neisser.