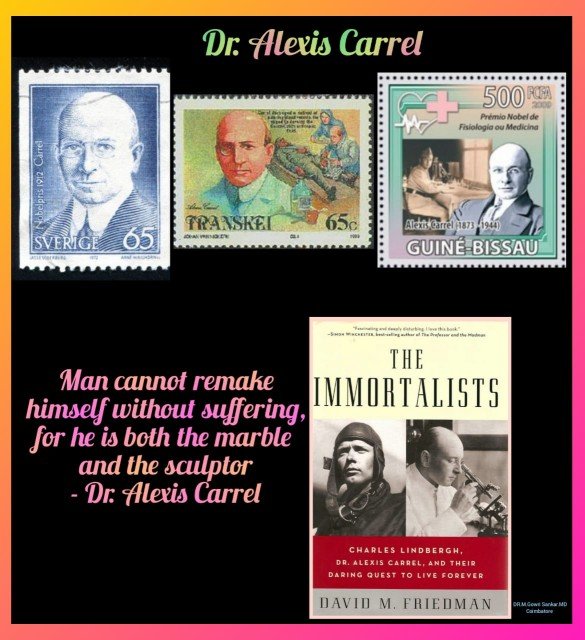 🔹Carrel’s father was a textile manufacturer but he passed away when Carrel was 4 years old. Then his mother undertook some embroidering work to bring up her three children. Carrel was quite impressed by the way his mother used the tiny needles and skillfully did her work.
🔹During his school days, he was interested in dissecting birds and conducting experiments in chemistry. His immense interest directed him to study medicine so he joined at the University of Lyon and completed his graduation from there.
🔹In the year 1894, the French President Sadi Carnot was assassinated with a knife. He bleed to death due to the injury of his portal vein. The surgeons who treated the President felt that the vein could not be successfully reconnected. This left a deep impression on Carrel and he set about developing new techniques for suturing blood vessels.
🔹As soon as he completed his graduation, he involved himself in repairing of blood vessels. Since he had grown up watching his mother’s embroidery technique, he realized the method of suture by using tiny needles and very fine thread.
🔹Hence, he developed a method to suture them together end-to-end with a minimum of stitches. Initially he experimented with animals while working at the University of Lyon and then published his technique of End-to-End anastomosis of injured vessels with triple-threaded sutures in 1902, which is now known as “Carrel’s seam.”
🔹Afterwards, Dr. Carrel emigrated to United States during 1904, where he worked at the University of Chicago and then moved to the Rockefeller Institute for Medical Research, New York.
🔹He then served there all his remaining days. Also, he had done an investigation there and succeeded in preservation of living tissues outside of the body to keep the organs or tissues alive.
🔹Moreover, his work greatly influenced organ transplantation. In fact, he was the first to demonstrate that blood vessels could be kept in cold storage for long periods of time before transplanting them and subsequently he laid the foundation of organ transplant in 1904 by his suturing techniques of blood vessels.
🔹Further, Dr. Carrel collaborated with the English Biochemist Henry Dakin during the First  World War and together they developed the “Carrel-Dakin method” of treating wounds with antiseptic fluids (sodium hypochlorite) to prevent wound infection and thereby reduced the incidence of limb amputation.
🔹In addition, during 1935 Dr. Carrel in collaboration with an engineer, Charles Lindberg (solo transatlantic flyer) designed a sterile perfusion pump called “Carrel-Lindberg pump” which was actually a forerunner of later developments in heart lung machine.
🔹In order to recognize his tremendous contribution, Dr. Carrel was honored with the Nobel Prize for Medicine concerning to his vascular suturing techniques in 1912.
🔹Eventually, Dr. Carrel was highly praised as a great Surgeon and Biologist – a man overflowing with ideas. He pioneered methods of Suture and Transplant that changed the face of surgery from a high-risk gamble into a tool with far-reaching potential to save lives.

The Vibrant Domain of Vascular Surgery