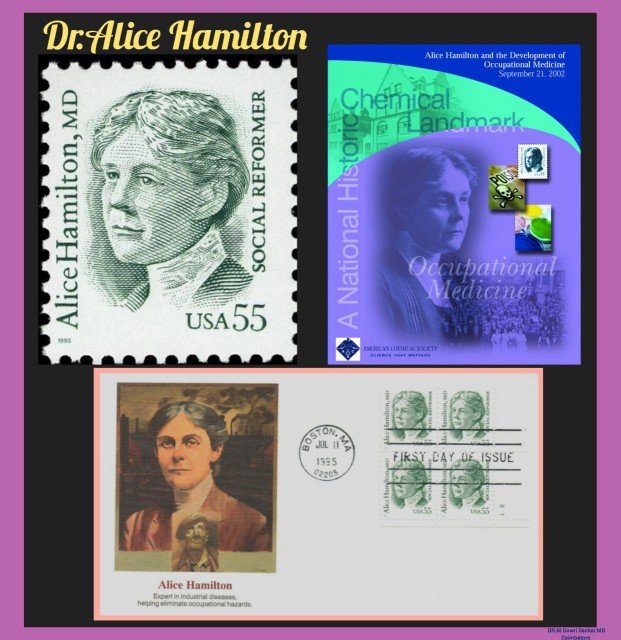 🔹Alice Hamilton studied medicine at the University of Michigan Medical School and graduated in 1893.
🔹After completion of her studies, she travelled to Germany and studied bacteriology. She further did her postgraduate studies at the Johns Hopkins University Medical School.
🔹In her early days, she had a intimate friendship with reformer Jane Addams, who was known as the “Mother of social work” in United States. By joining her, Dr. Hamilton started her scientific research with the intention of social benefit.
🔹Subsequently, she pioneered the study of Industrial Medicine which had became very important because the Industrial Revolution of the late 19th century had led to new dangers in the workplace.
🔹Thereupon, Dr. Hamilton was entirely focussing on industrial diseases and therefore, she became a Pioneer in Industrial Toxicology.
🔹Simultaneously, she broke the gender barrier of her period by becoming the First Woman Faculty of Harvard University in 1919 and later she became the First Professor of Industrial Medicine.
🔹During her career, she witnessed the dangerous effects on worker’s health due to the exposure to Carbon monoxide and Lead poisoning.
🔹She then focused her explorations on occupational toxic disorders by examining the effects of substances such as aniline dyes, radium,  benzene, carbon disulfide and  hydrogen sulfide gases.
🔹As a result of her investigations and reports in industrial health, new laws were put up for employers to take safety precautions to protect workers. Also the workers compensation laws were implemented.
🔹 Moreover, she published numerous studies on industrial toxicology and several books including “Industrial Poisons in the United States” in 1925 and “Industrial Toxicology” in 1934.
🔹She was honored with several awards for Pioneering in Occupational Epidemiology and Industrial Hygiene.
🔹Additionally, “Lasker Award” was given exclusively for her public service contributions in 1947 and TIME magazine awarded her “Woman of the Year” in medicine in 1956.
🔹After her great accomplishment, she passed away at her age of 101 years. As a tribute to her work, the National Institute for Occupational Safety and Health in United States presents “Alice Hamilton Award for Excellence in Occupational Safety and Health” to recognize excellent scientific research in the field.

A Pioneer Physician in Occupational Medicine