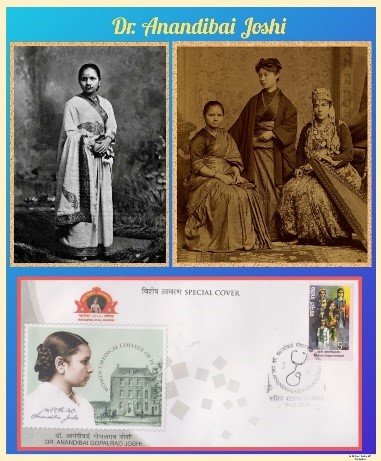 🔹Anandibai was born in a place called Kalyan in Maharashtra. She got married at the age of 9 years to Gopalrao Joshi, who was a postmaster.

🔹Gopalrao was basically a progressive thinker and a strong supporter of women’s education. Therefore, he supported Anandhi to complete her schooling and also to learn English.

🔹At the age of 14 years, she gave birth a boy baby. But unfortunately, the child short-lived for only ten days because of unavailable medical care at that time.

🔹This painful experience pushed Anandhi to dedicate herself to healthcare of the country. Hence, she determined to become a physician. Also, Gopalrao motivated Anandi to set an example in the society by studying medicine.

🔹After an uphill struggle, she started her journey with the support of Gopalrao from Calcutta to New York. In United States, she studied the two years course of medicine in Womens Medical College of Pennsylvania and graduated in March 11,1886.

🔹Surprisingly, Queen Victoria sent her a congratulatory message on her graduation.

🔹In fact, she was the First Indian Women who studied and graduated in western medicine and she is also believed to be the first Indian women to set foot on American soil.

🔹After completion of her education, she was gladly received by The princely state of Kolhapur as a Physician-in-Charge to the female ward of the Albert Edward hospital.

🔹But unfortunately, she suffered from tuberculosis and passed away at the age of 22 years.

🔹Subsequent to her achievement, she became an inspiration to generations of women to follow her footsteps and pursue medical education.

🔹Although she could not convert her degree into a successful profession due to her untimely death, yet she undoubtedly left a mark and contributed to woman’s upliftment in India.

🔹In order to honour her meritorious service, the Government of Maharashtra has established a Dr. Anandibai Joshi Fellowship for young women working on women’s health. Also, the crater on Venus has been named Joshi.

A Trailblazer in Women’s Education