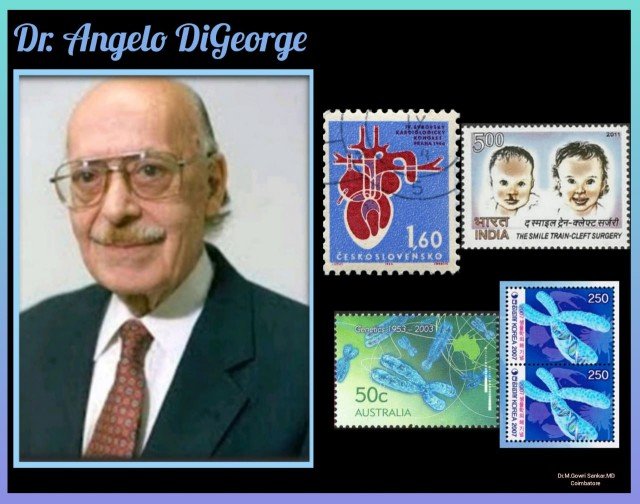 🔹DiGeorge did his medical studies at the Temple University School of Medicine, Philadelphia, in 1946.
🔹Then he completed his Pediatric residentship at St. Christopher’s Hospital for Children and further did his Post-doctoral Fellowship in Endocrinology at the Jefferson Medical College in 1954.
🔹Subsequently, he was the Chief of Endocrinology and later became the Director of the Pediatric Clinical Research Center at St. Christopher’s Hospital.
🔹Moreover, he was the primary author for Endocrinology chapter of Nelson Textbook of Pediatrics.
🔹He also gained international recognition in 1965 for his ground breaking discovery of a disorder which arises from developmental failure of the third and fourth pharyngeal pouches. It’s characterized by:
🔅Hypoplastic thymus or absent thymus with poor immune system
🔅Hypoparathyroidism, which results in hypocalcemia
🔅Conotruncal heart defects (i.e.Tetralogy of Fallot, interrupted aortic arch, ventricular septal defects, vascular rings)
🔅Cleft lip and /or palate
🔹In order to remember his great work, this birth defect was named “DiGeorge syndrome or Velocardiofacial syndrome.”
🔹Furthermore, by doing the molecular study in 1993, it was identified that about 94 percent of patients were found with DiGeorge syndrome had a chromosome microdeletion in the region of 22q11.2
🔹Consequently, a charitable organization called “The 22q11.2 Society” was established, which promotes the diagnosis, prognosis and management of related disorders.
🔹To commemorate the life and work of Dr. Angelo DiGeorge, the society has inaugurated “The Angelo DiGeorge Medal” to recognize his outstanding contribution in 22q11.2 every year.