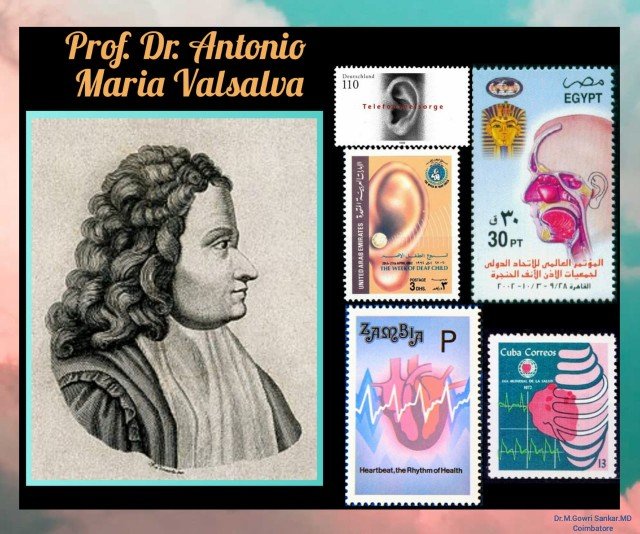 🔹Valsalva studied Medicine and Philosophy in Bologna, Italy and graduated in 1687. There he studied the great teachings of Marcello Malpighi, who is known as the Founder of Microscopic Anatomy.
🔹After his studies, Valsalva began his career as a Faculty at the University of Bologna and then became a Professor of Anatomy in 1705.
🔹Although Valsalva was a skilled practitioner, yet his greatest passion was centered on Experimental Physiology and Anatomical Dissection. He spent most of his time in the anatomy amphitheater and is credited with 1,000 dissections.
🔹He also credited for identifying the function and naming of the structures of middle ear and inner ear. He coined the term Eustachian tube.
🔹His Eponyms…
🔅 Aortic sinus of Valsalva – Three dilatations in wall of the aorta behind the flaps of the three aortic semilunar valves.
🔅 Valsalva’s antrum – Mastoid antrum in the petrous portion of the temporal bone.
🔅 Valsalva’s ligaments – Ligaments that attach the auricle to the side of the head.
🔅 Valsalva’s muscle – A band of vertical muscular fibres on the outer surface of the tragus of the ear.
🔅 He is best remembered for describing VALSALVA MANEUVER in 1704.
🔹Valsalva’s pupil Giovanni Battista Morgagni edited Valsalva’s complete writings and also published Valsalva’s biography in 1740.
🔹In modern medicine, Valsalva maneuver is used to:
🔅Arrest supraventricular tachycardia.
🔅Assess the intensity of cardiac murmurs.
🔅Diagnose intrinsic sphinter deficiency in urodynamics.
🔅Valsalva device in a spacesuit for astronauts.
🔹Dr. Antonio Maria Valsalva, pupil of Malpighi and teacher of Morgagni, contributed handsomely in many fields of medicine and indirectly made important contributions to Morgagni’s great work.