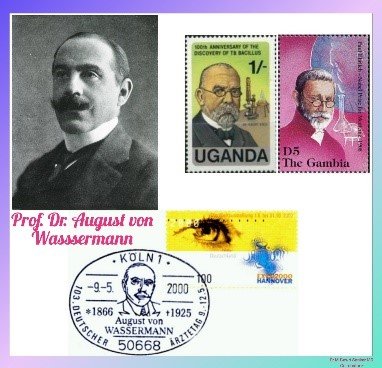 🔸Wassermann studied medicine at four different places – Universities of Erlangen, Vienna, Munich, and Strasbourg. Then he completed his Doctorate in Medicine in the year 1888. Subsequently, he joined as an unpaid assistant in the “Institute of Infectious Disease” in Berlin which was headed by Dr. Robert Koch at that time.

🔸By associating with Dr. Paul Ehrlich (a Nobel Prize winner for his contributions to immunology), he conducted many experiments for the development of Diptheria anti-toxin.

🔸His collaboration with Dr. Albert Niesser, (who discovered the causative agent of gonorrhea), led him to work on compliment fixation reactions and he developed antibody detection test to diagnose syphilis in 1906.

🔸Together they developed the test just one year after the discovery of the Syphilis causative Treponema pallidum.

🔸In fact, the WASSERMANN-NEISSER TEST was the predecessor of today’s Venereal Disease Research Laboratory (VDRL) test for the diagnosis of syphilis. Soon, it became a worldwide famous test and an invaluable method in diagnosis of Syphilis.

🔸All his fabulous experiments and discoveries earned him the honour of EXTRAORDINARIUS at Dr. Robert Koch’s Institute of Infectious Disease.