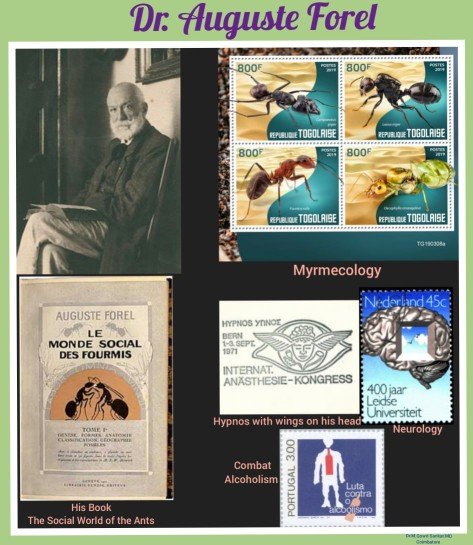 🔹Forel was a nature lover and during his childhood was deeply fascinated by the life of insects – particularly ants.
🔹He studied medicine at the University of Zurich and then did neuroanatomical studies at the University of Vienna, where he received his medical degree in 1872.
🔹While studying, he also published his papers regarding behavior of ants. Thereupon he became a member of the Swiss Entomological Society.

🔹After completion of his studies, he joined work in an Asylum at Zurich, where he explored the Therapeutic value of Hypnotism. He then got promoted as a Professor of Psychiatry at the University of Zurich.
🔹Dr. Forel became well known for his investigations on brain structure. He was the first to describe the Tegmental Fields of Forel and the Zona incerta (mixture of white matter and gray matter between the Body of Luys and the hypothalamus).
🔹He further studied about thalamus and hypothalamus and produced a detailed descriptions about Trigeminal, Vagus, and Hypoglossal nerves.

🔹 Furthermore, he was a pioneer in the anti-alcoholic movement in Europe. In 1889, he founded an Institute at Zurich to provide medical treatment for alcoholism and contributed himself to social reforms through his career.
🔹He was a remarkable Taxonomist in his period and described more than 3,500 new species.
🔹For his entomological research, he had a huge collection of ants, which was recognized as one of the largest in the world.

🔹Moreover, he was celebrated as “Myrmecologist” – A specialist in the branch of entomology which deals with ants.
🔹In fact, due to his childhood desire, Dr. Forel became engrossed in the psychology of ants, which led him to contribute greatly to the study of their social instincts. As a result, he published his observations on ants titled “The Social World of the Ants” in 1921.