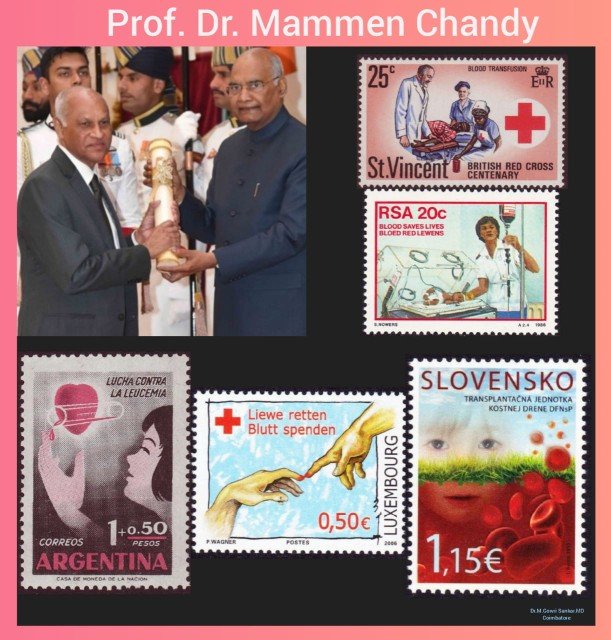 🔹Mammen Chandy studied MBBS and graduated in 1972. He then completed his MD in Internal medicine at Christian Medical College, Vellore in 1975.
🔹While studying, he was highly inspired by his teachers in the Department of Clinical Pathology by their outstanding teaching modules followed by a practical session, which aroused his interest to study hematology in future.
🔹After his post-graduation, he joined in CMC, Vellore to work as a faculty in 1979 and served there until his retirement in 2009. Before his retirement, he was the Head of the Department of Hematology from 1987 to 2007.
🔹He had done his Fellowship in the Hematology and Pathology at Westmead Center, Sydney, Australia and obtained his FRACP and FRCPA in 1985.
🔹After his fellowship, he rejoined in the Department of Medicine in CMC and started his extensive work in the field of hematology.
🔹When he was heading the team, the Department of Hematology was inaugurated as a separate unit in 1986. By the support of other specialties such as Department of Clinical Pathology and Blood bank, he introduced new concepts in hematology.
🔹His ground-breaking works…
🔹He introduced the significant concept of Component therapy in blood transfusion and subsequently, he insisted that clinicians practice this concept.
🔹In fact, he became a pioneer in developing the field of hematology and bone marrow transplantation in India – it started as the Bone Marrow Transplant Programme in 1986.
🔹In India, CMC, Vellore was the first to do a Bone Marrow Transplant in a patient with Thalassemia in 1986.
🔹Furthermore, his team developed HLA laboratory – an assay for measuring Busufan levels by using HPLC method, as well as established Diagnostic molecular biology tests for blood disorders.
🔹He was instrumental in initiating the DM Hematology course in 1999.
🔹Indeed, Dr. Chandy has a special interest in aplastic anemia, thalassemia, acute leukemia and stem cell transplantation and published more than 130 scientific articles so far.
🔹After his retirement from CMC, Vellore, Dr. Chandy was given another challenging position as the Director of Tata Medical Center, Kolkata, where he has successful in setting up a bone marrow transplant unit.
🔹In order to honour his contribution in the field of medicine, Dr. Chandy was honoured with various awards including Padma Shri and the prestigious Dr. B.C Roy Award by the Medical Council of India.
🔹Through his 40 years of remarkable service in medicine, his advice to young doctors… “Just keep doing good work quietly and you will surely be noticed and will be able to find enough work to keep you satisfied.”

Father of Hematology in India.