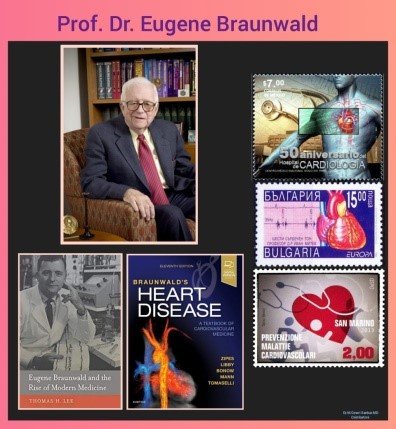 🔸Braunwald was born in Vienna, Austria. During the Second World War his family was forced to migrate to United States.

🔸He studied medicine at the New York University Medical School. He further worked there with his mentor Dr. Ludwig Eichna and was inspired to study cardiology.

🔸Thereupon, he did his post-graduate training at Johns Hopkins Hospital. Subsequently he pursued research in cardiology as a result of working with Dr. Andre Cournand, who pioneered the technique of cardiac catheterization.

🔸Then he got appointed as the first chief of the cardiology branch and clinical director at National Heart Lung and Blood Institute.

🔸Afterwards Dr. Braunwald started his extensive research in the field of cardiology and was the first to measure both Left ventricular ejection fraction and left ventricular dp/dt in patients.

🔸Also, he was the first to identify and define the pathophysiology of Hypertrophic Cardiomyopathy.

🔸Furthermore, his laboratory extended its research in myocardial stunning and ventricular remodelling after myocardial Infarction. He also demonstrated the salvage of ischemic myocardium following coronary occlusion.

🔸He founded and chaired the TIMI (Thrombolysis in Myocardial Infarction) study group.

🔸In PROVE-IT TIMI 22 Trial, he further demonstrated the benefit of intensive reduction of LDL by statin therapy and thereby changed the guidelines for practice.

🔸Moreover, he went on to publish more than 1000 scientific articles. He also worked as a founding editor of a premier book in cardiology – Braunwald’s Heart Disease. He further served as an editor for 12 editions of Harrison’s Principles of Internal Medicine.

🔸Dr. Braunwald has played a significant role in cardiology in the past half century. He has made unprecedented contributions in cardiovascular research and clinical cardiology. His excellence continues in the roles of physician, scientist, academic teacher, editor and an administrator.

The Most Renowned Cardiologist in The World