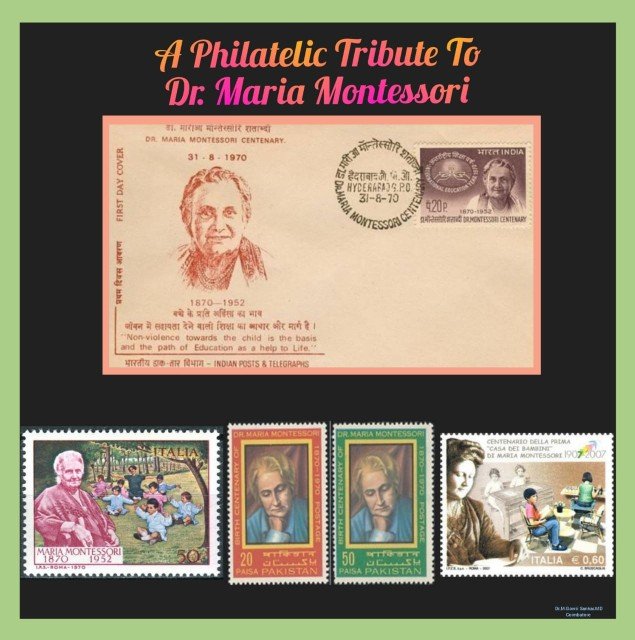 💠Founder of the Montessori Method of Education

🔸At the age of 13 years, Maria wanted to attend the boys technical school whereas her father was very much against it. But she did it with the support of her mother.
🔸After completion of schooling, she was interested in studying medicine – a male-dominated sphere.
🔸Initially, she was refused but eventually entered into the University of Rome for studying medicine. In fact, she was the First Woman Medical Student in Italy.
🔸In spite of facing many obstacles, she successfully graduated in 1896.
🔸After completion of studies, Dr. Maria started her career at Pediatric and Psychiatric Clinics of the University of Rome.
🔸Consequently, she involved herself in researching on early childhood education among mentally disabled children.
🔸By her observations and experience on those children, she designed an effective learning material & classroom environment to transform the education pattern of young children.
🔸Later, she was appointed as a Director of an Educational Institution, so she got an opportunity to study among normal children as well.
🔸She further established a “First Day Care School for Children” between the age of 2-6 yrs in the name of “Children’s House” in Rome during 1907.
🔸Eventually, the news about the success of the Day Care School spread throughout Italy and her education system was adopted worldwide.
🔸Furthermore, she established a very peculiar “The Montessori Programme.” It’s a method of education based on self-directed activity, hands-on learning and collaborative play.
🔸She then discovered and declared that experimental learning from this type of classroom would lead to a deeper understanding of language, mathematics, science, music, social interactions and much more.
🔸Here the teachers were educated to stand back and “Follow the Child,” which means – let children’s natural interests take the lead. Subsequently, she travelled to European countries and United States to promote her “Effective Teacher Training Programmes.”
🔸Unfortunately, during the Second World War, Montessori schools were destroyed by Nazis and both books and effigies were burned.
🔸Hence, Dr. Maria and her son Mario were forced to move to India. This painful scenario became an opportunity for her to train more than thousand Indian teachers. Here she spent around seven years.
🔸Apart from all her continuous service, she also penned and published books on her educational system.
🔸Her distinguished approach and teaching method were groundbreaking and innovative. The “Montessori Education System” has not only been adopted all over the world but also have made a lasting impact on our education system.

A Physician Who Revolutionized the Education System of the World