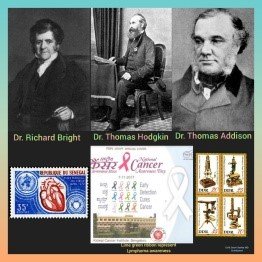 🔸Hodgkin pursued medicine at St Thomas and Guy’s Medical School, London in 1819. He then studied at the University of Edinburg and finished his MD in 1823.

🔸While he was a student in 1821, he went to Paris to learn the use of stethoscope, which had been recently invented by Dr. Rene Laennec. After his trip, Hodgkin introduced the first stethoscope to Guy’s Hospital.

🔸Then he began his career as a lecturer in anatomy at Guy’s Medical School where he found his lifelong passion for pathology.

🔸Also, he worked with remarkable figures such as Dr. Richard Bright (Father of Nephrology) and Dr. Thomas Addison (Known for Addison’s disease). The trio were celebrated as “The Three Great Men of Guy’s.“

🔸Furthermore, he was one of the first to describe the Aortic regurgitation. He explained its clinical characteristics and correlation with post-mortem findings in the year 1827.

🔸Subsequently, he designed the principles of Achromatic microscope in 1830 for his pathological study, which in turn led to “The Foundation of Modern Histology.”

🔸He also described the disease which bears his name “Hodgkin’s Lymphoma” in 1832. Here, he explained the pathological relationship between lymphadenopathy and splenomegaly and then published the article On Some Morbid Appearances of the Absorbent Glands and Spleen.

🔸Moreover, he published his major work on pathology entitled The Morbid Anatomy of Serous and Mucous Membranes. It’s a classical text book in modern pathology.

🔸Dr. Hodgkin also pioneered preventive medicine, which was published in the name of On the Means of Promoting and Preserving Health in 1841. In this, he explained the benefits of cleanliness, fresh air and proper diet.

🔸He also devoted much of his life to philanthropic causes such as the relief of suffering in underdeveloped countries and the freeing of slaves.

🔸Finally, he concluded his service as “The little service I have done…”

An Immortal Physician and Social Reformer