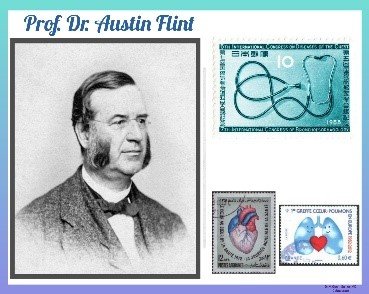 🔸Austin Flint studied medicine at the Harvard University and graduated in 1832. While studying, he was very much inspired by his teacher Dr. James Jackson, who was a great follower of Dr. Rene Laennec.

🔸After completing his studies, he started practising medicine in Boston and soon became very reputable.

🔸Subsequently, he was the first to use the Binaural Stethoscope in United States.

🔸He further made several important contributions to gain knowledge about diseases pertaining to the heart and the respiratory system. He then coined the term Broncho-vesicular breathing.

🔸Additionally, he developed the technique of Percussion and Auscultation of the heart and lung along the lines of an Austrian physician Leopold Auenbrugger, who invented percussion as a diagnostic technique, and Rene Laennec, a French physician, who invented the monaural stethoscope. Hence Dr. Flint is called the American Laennec.

🔸In fact, his treatise on the Principles and Practice of Medicine published in 1866 was the leading textbook of medicine at that time.

🔅Austin Flint Murmur – A mid-diastolic murmur secondary to severe aortic regurgitation. Best heard at the apex of the heart. He described this murmur in 1862.

🔅Flint’s Law – An elevation of pitch always accompanies diminution of resonance in consequence of pulmonary consolidation.

🔸Ultimately, because of his inspiring investigations, Sir William Osler would often say to his students – “Whoever takes a stethoscope in his hand is a debtor to Dr. Flint for simplifying the process that was complicated in the auscultation of the heart and lung.”