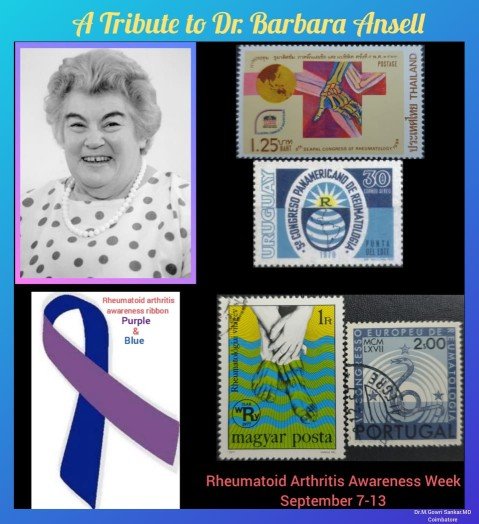 🔹Ansell studied medicine at Birmingham University in 1946 and did her post-graduate training at the Royal Postgraduate Medical School in Hammersmith. Also, she held the unique distinction of Fellowship of three Royal Colleges.
🔹After completion of her studies, she got appointed at the Canadian Red Cross Memorial Hospital, Taplow. Simultaneously, she involved herself in researching on rheumatic fever in 1951.
🔹Later, she was promoted as a Consultant Physician in Rheumatology at Taplow and then she became the Head of Division of Rheumatology at Northwick Park Hospital in 1976.
🔹Subsequently, she had done her extensive research in Juvenile Idiopathic Arthritis and developed the Classification system based on the pattern of disease presentation, which is still being used as a basis for the current ILAR (International League of Associations for Rheumatology) Classification.
🔹Furthermore, she was the first Chairman of EULAR Standing Committee on Paediatric Rheumatology and stimulated the foundation of the British Paediatric Rheumatology Group and the Paediatric Rheumatology European Society.
🔹She also found the need for new treatments and clinical trials. She had been at the forefront of most of the clinical trials for drugs of childhood arthritis.
🔹Further, Dr. Ansell recognized the importance of maintaining educational and social skills among the affected young children.
🔹So she pioneered a Team Management System with the support of professionals such as physiotherapists, occupational therapists, nurses, social workers, teachers, orthopaedic surgeons, dentists, ophthalmologists and podiatrists.
🔹Moreover, she has authored around 360 articles in adult and paediatric rheumatology.
🔹As a tribute to her meritorious service, a BANNAR was established in her name (Barbara Ansell National Network for Adolescent Rheumatology) in UK. It is a national research portfolio covering the spectrum of disease and research methods for Adolescent and Young Adult Rheumatology.
🔹After her huge contributions in the field of medicine, she stated “My greatest contribution is training doctors from all over the world that children with arthritis are not miniature adults.”

The Doyen of Paediatric Rheumatology