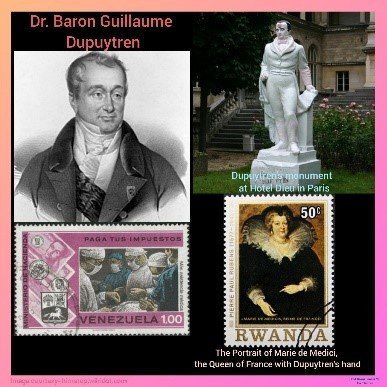 🔹Dupuytren had studied medicine in Paris. At his young age of 18 years, he got appointed as a Prosector. Few years later during 1803, he was appointed as an Assistant Surgeon and then he became a Professor of Operative Surgery in Hotel-Dieu the most famous hospital in Europe at that time.

🔹In fact, he was very much determined to his profession and one of the best practiced surgeon during his time. Also, he was one of the first in introducing the Anatomical-Clinical methods in surgery.

🔹Furthermore, he was one of the first surgeon who successfully drained a brain abscess by using trepanation method and the first who excised the lower jaw in 1812 and also first to provide the detailed description of the pathology of Congenital Dislocation of the Hip in 1826.

🔅 Dupuytren’s Contracture – Contracture of palmar fascia causing the ring and little fingers to bend into the palm so that they cannot be extended. He was the first who carried out the surgical procedure to repair contracture in 1831 and published in The Lancet during 1834.

🔅 Dupuytren’s Phlegmon – Diffuse neck abscess in the anterolateral part of the neck.

🔅 Dupuytren’s Classification – He was the first who classified the burns into six degrees of increasing severity.

🔅 Dupuytren Splint – Splint for immobilization in Dupuytrens fracture of fibula & for wrist fracture.

🔹As a Professor of Surgery, Dupuytren contributed extensively to the progress of surgery by analysing the benefits of pathological anatomy. He was recognized as an outstanding teacher of his generation and celebrated as Prince of European Surgery.

The Greatest Surgeon of the 19th Century

The Napoleon of Surgery