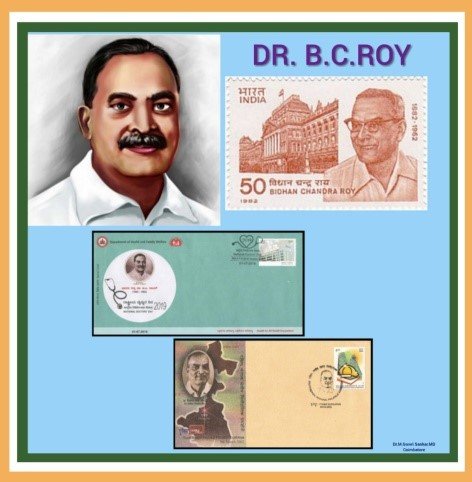 🔹Dr. Bidhan Chandra Roy was born and brought up in the Patna district of Bihar. His father was an excise inspector and his mother was a devoted social worker. They were strong followers of the Brahmo Samaj movement.

🔹His mother deeply influenced his personality by teaching him Bhagavad Gita and the writings of Rabindranath Tagore.

🔹While being a medical student, he was deeply impressed by the inscription “Whatever your hand finds to do, do it with all your might.” This became a source of inspiration for him throughout his life. After his studies, he started his practice under State Health Service.

🔹He aspired to do higher studies at St. Bartholomew’s Hospital, London. Being an Indian, Dr. B. C. Roy’s application was rejected and finally got admission after 30 meetings with the Dean of the institution.

🔹Dr. B. C. Roy was the first to complete both MRCP in Medicine and FRCS in Surgery at St. Bartholomew’s Hospital, London in 2 years and 3 months’ duration and returned to India in 1911.

🔹Moreover, Dr. Roy was a famous freedom fighter and a friend of Mahatma Gandhi. He had a strong belief that freedom would remain a dream unless the people became healthy and strong in mind and body.

🔹During his period, he implemented free education, free medical aid and established the infrastructure of the city.

🔹After the independence, he became the second Chief Minister of West Bengal in 1948 and served in that post for 14 years until his death.

🔹Moreover, Dr. Roy has been recognized as an Architect of Modern Bengal. He established industrial hubs out of Calcutta and also found 5 cities in Bengal, namely Durgapur, Kalyani, Bidan nagar, Ashok nagar and Habra.

🔹He also pioneered in the founding of the Indian Medical Association in 1928 and the Medical Council of India. Also, he served as the first President of MCI.

🔹In addition, his birthday (July 1st) has been declared as “National Doctors Day“.

🔹In 1962, an annual award in the name of Dr. B. C. Roy National award was initiated by Medical Council of India, for rewarding outstanding service in the field of medicine, science, philosophy, politics, literature and arts.