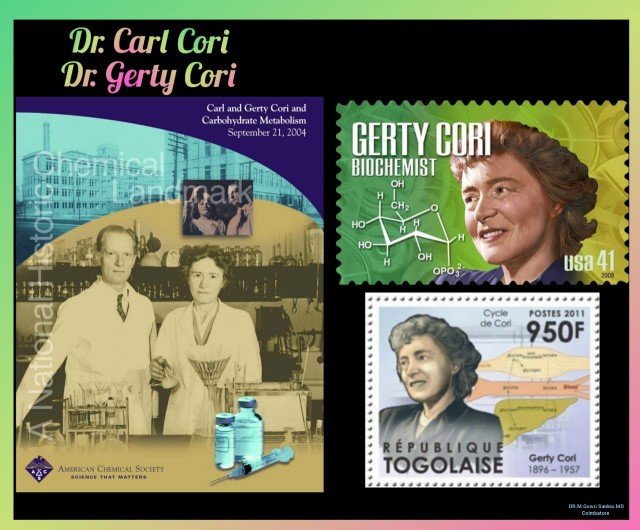 🔹Carl studied medicine at the Medical School of Charles University in Prague. While studying, he met his future wife Gerty Theresa. Both graduated and married in the same year – 1920. Then they worked together in a clinic at Vienna.
🔹After some time, Dr. Carl Cori was invited to work with a Noble Laureate Dr. Otto Loewi to study the effect of the vagus nerve on the heart.
🔹Later, Dr. Carl Cori was offered a position at the State Institute for the Study of Malignant Diseases (now it’s a Roswell Park Cancer Institute) in New York.
🔹While at the Institute, Dr. Carl Cori and Dr. Gerty Cori had a great scientific collaborations.
🔹Subsequently, the duo started focusing on understanding carbohydrate metabolism detailing the biochemical processes involved in the production, disintegration and inter-conversion of carbohydrates in living organisms. This study led to the discovery of the “Cori Cycle” also known as the “Lactic Acid Cycle” in 1929.
🔹Role of Cori’s cycle:
🔅Cori’s cycle is important in producing ATP, an energy source during strenuous activity.
🔅It is an important source of substrate for gluconeogenesis.
🔅On fasting state it contributes lactate to overall glucose production.
🔅The drug metformin can cause lactic acidosis in patients with renal failure because it inhibits the hepatic gluconeogenesis of the Cori cycle, particularly the mitochondrial respiratory chain complex.
🔹Further, they continued their research on glucose and glycogen and began to describe Glycogenolysis by identifying and synthesizing the important enzyme Glycogen phosphorylase.
🔹Consequently, the scientific couple were honored with Nobel Prize in Physiology or Medicine in 1947 for their discovery of the course of catalytic conversion of glycogen.
🔹Dr. Gerty Cori became the third woman to win a Nobel Prize in science and the first woman to be awarded the Nobel Prize in Physiology or Medicine.
🔹Moreover, the couple invested themselves in training the upcoming generations of scientists. They successfully developed six other future Nobel Laureates – these scientists worked at their laboratory in the Washington University.