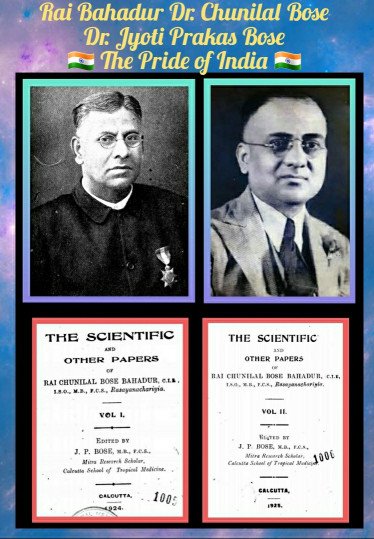 🔸Bose was born in Calcutta in 1861. He joined at Calcutta Medical College in 1880 to study medicine. In spite of financial crisis in his family, he obtained gold medal in Botany, Pathology and Medicine and secured honours in many subjects.

🔸After his medical studies, he joined Bengal Government Service in 1886. Initially, he started his career as a Chemical Examiner and as an Assistant Professor of Chemistry in Calcutta Medical College and later became Professor.

🔸His interest in the field of chemistry elevated him to be elected as Fellow of Chemical Society of London and Fellow of the Calcutta University in 1890’s.

🔸As a Chemical Examiner, he was associated with Medico-legal sections and involved in passing of Indian Poison Act in 1904 and thereby, he stopped the free sale of toxic substances.

🔸During his career, he was closely associated with Dr. Mahendralal Sarcar and with Indian Association for the Cultivation of Science. There he served as a lecturer in chemistry and taught students about chemical analysis of food, water and drugs.

🔸In the beginning of 20th century, Dr. Bose emphasized that imbalance in the Bengali diet and sedentary life were responsible for diabetes mellitus. So, he advocated the importance of maintaining healthy life style such as balanced diet and regular exercise in open air for managing diabetes.

🔸During his career, he held many positions and was associated with:

🔅Sanitary Board and Advisory Board of Industries, Bengal

🔸He strongly believed that education and awareness are the key in creating reforms. So, he educated the mass by publishing many articles, books and booklets on:

🔅The Health of Indian Students

🔅A Few Hints on Sanitary Reconstruction

🔅Use of Chlorine as a Disinfectant in Drinking water

🔅A Pinch of Common Salt

🔸Moreover, he was honoured for his work by the title Rai Bahadur in 1898. Also, he was appointed as Sheriff of Calcutta in 1921 and rendered his service for the welfare of the city.

🔸His son Dr. Jyoti Prakas Bose, who was the first to initiate Insulin in India in 1923 after epoch making discovery of Insulin by Canadian Physician Dr. Frederick Banting and Charles Best in 1921, compiled his father’s articles into a book with two volumes with the title “The Scientific and Other Papers of Rai Bhagadur Dr.Chunilal Bose,” which was published in 1924 & 25 respectively.

🔸Dr. Chunilal Bose was associated with many educational institutions, social and philanthropic activities in Bengal. He devoted his entire life to create awareness about the benefits of sanitation, hygiene, food adulteration and environmental pollution.

A Physician with Brilliant Mind