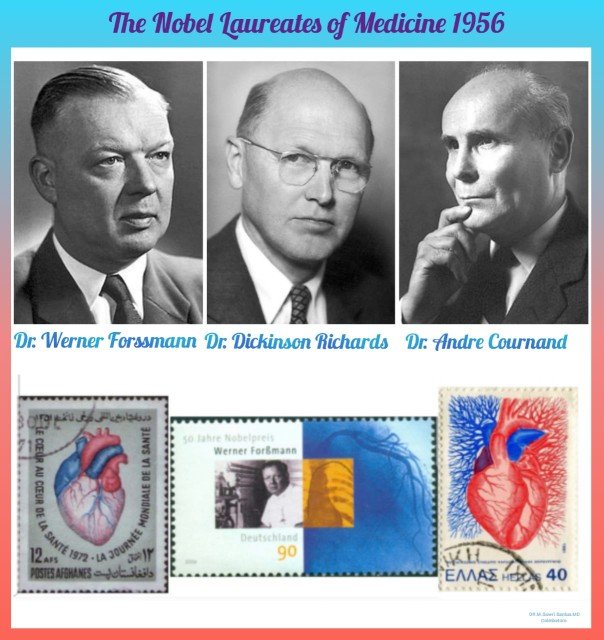 🔹Richards studied medicine at Columbia University College of Physicians and Surgeons, and graduated in 1923. After his graduation, he emigrated to England, where he worked under Sir Henry Dale, on controlling the circulation of the liver.
🔹Then Dr. Richards returned to US in 1928 and began his research on pulmonary and circulatory physiology while working under Professor Lawrence Henderson of Harvard.
🔹Subsequently, he collaborated with French physician Dr. Andre Cournand to research on Respiration and Circulation. Their collaboration continued for four decades.
🔹In early 1929, Dr. Werner Forssmann, a German physician devised a method of cardiac catheterization and succeeded by inserting a catheter into his own heart. But unfortunately, his work was not recognized that time.
🔹During the second World War, Dr. Cournand and Dr. Richard had done a study on treatment related to traumatic shock, in which they came to know about “Forssmann’s catheterization” and they further built on the work by showing that cardiac catheterization could serve as a means of transfusion in cases of traumatic shock.
🔹Furthermore, they expanded the catheterization techniques to measure the pulmonary artery blood pressure and to assess the congenital heart disease.
🔹In 1941, they both published a series of studies related to the utilization of cardiac catheterization to measure right atrial and right ventricular pressure, blood volume and oxygen content.
🔹Consequently, their work on developing the cardiac catheterization process was highly recognized and honored by several awards such as “The John Philipps Memorial Award” of the American College of Physicians and the “Kober Medal” of the Association of American Physicians.
🔹Dr. Richards was honored with shared Nobel Prize in Physiology or Medicine in 1956 along with Dr. Werner Forssmann and Dr. Andre Cournand for their tremendous discoveries concerning cardiac catheterization and pathological changes in the circulatory system.

A Physician Who Revolutionized the Field of Medicine