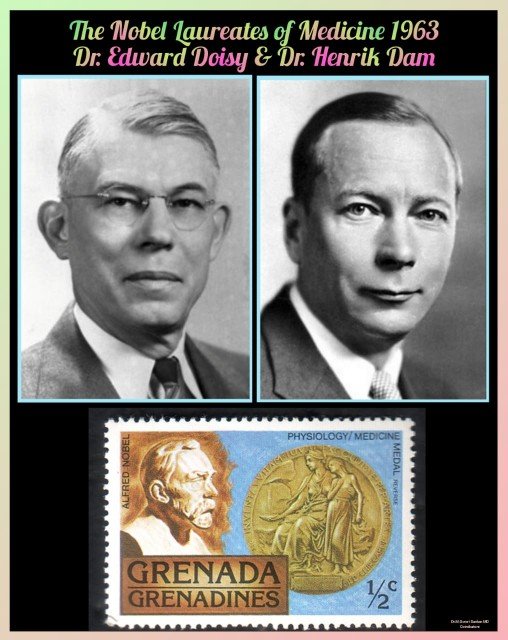 🔹Doisy had done his undergraduation at the University of Illinois and then did his post graduation in 1916. He further completed his Ph.D at Harvard University in 1920.
🔹After completing his studies, he began his career as an Assistant in Biochemistry at Harvard Medical School. Later, he became a Professor of Biochemistry at Saint Louis University School of Medicine, Washington.
🔹Subsequently, Doisy started his groundbreaking investigation with biochemical studies on Sex hormones and Vitamin K.
🔹He successfully isolated the Oestrone in 1930 and then he recovered Oestradiol from the ovaries of swine in the year 1936. Thereby he opened up the entire field of steroid hormones for chemical and medical investigation.
🔹Furthermore, he succeeded in isolating vitamin K from alfalfa in 1939.
🔹Additionally, Dr. Doisy studied the analogues of vitamin K and established the distinction between Vitamin K1, which was isolated from alfalfa and Vitamin K2 isolated from fish meal.
🔹At the same time, the another scientist from University of Copenhagen had done an extensive research on vitamin K. He was Dr. Henrik Dam, a Danish biochemist.
🔹While doing a dietary experiments on chicks, Dr. Dam found that the deficiency of certain nutrient leads to internal haemorrhage with increased clotting time in chicks. Then he demonstrated that the chicks treated with menaquinone, which is a derivatives in green vegetables, could prevent the bleeds.
🔹He then announced it was an anti-haemorrhagic factor and termed that nutrient as Vitamin K (K stands for Koagulation in German).
🔹Finally, both the scientist Dr. Edward Doisy and Dr. Henrik Dam were honoured with shared Nobel Prize in Physiology or Medicine in 1943 for their discovery of Vitamin K and its role in human physiology.
🔹Moreover, Dr. Doisy published many scientific articles and also published a book entitled Sex and Internal Secretions. He also donated most of his income to the research activity and to improve teaching infrastructure.
🔹In order to honour the meticulous contributions of Dr. Doisy, the state-of-the-art Edward A. Doisy Research Center of Department of Biochemistry and Molecular Biology were established at Saint Louis University School of Medicine.

The Kings of Vitamin K