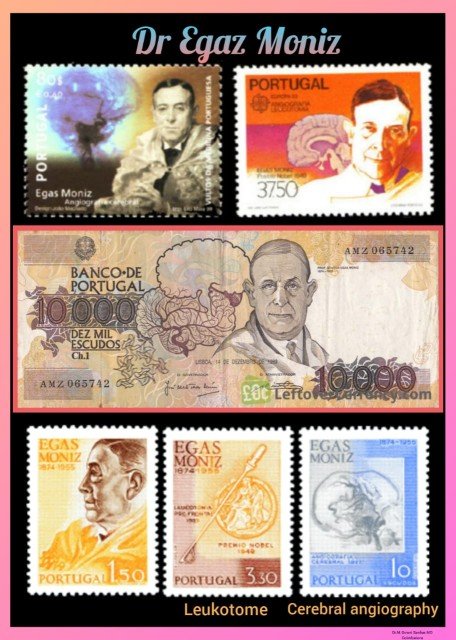 🔹Moniz was born in Portugal. He studied medicine at the University of Coimbra, Portugal and graduated in 1899.
🔹After his studies, he travelled to France to get trained in Neurology and Psychiatry. He learnt from renowned French physicians such as Jean-Athanase Sicard, Joseph Babinski, Pierre Marie and Joseph Jules Dejerine.
🔹Then Dr. Moniz returned to Portugal in 1911 and was appointed the Head of Neurology at the University of Lisbon and served there until his retirement in 1944.
🔹At the same time, Dr. Moniz had shown interest in politics. Since, he had a distinguished political career, he got elected to parliament and also served as Minister for External Affairs.
🔹In the year 1926, he retired from his political responsibility at the age of 51 and began his research in neurology.
🔹Dr. Moniz had done his pioneering work on Cerebral Angiography by injecting the radiopaque dyes of 25% sodium iodide solution into carotid arteries.
🔹He was the very first person who visualised the vessels of the brain by using radiologic contrast media and that led to the development of cerebral angiography in 1927.
🔹In fact, Cerebral angiography remained there – for almost 50 years – as the sole diagnostic tool for detecting intracranial pathology, until the introduction of CT scan in 1975.
🔹Additionally, Dr. Moniz had invented a Leukotome, which is a wire snare that is passed into the posterior aspect of each frontal lobe and rotated in order to cut the white matter. He termed this surgical procedure as Prefrontal leucotomy.
🔹Today, it’s known as lobotomy, which was used for the treatment of certain psychoses especially in schizophrenia.
🔹Dr. Moniz had performed the first Psychosurgery on 12 November 1935 and this was considered one of the most important discoveries ever made in psychiatric medicine. Henceforth, he is considered one of the Founders of Modern Psychosurgery.
🔹His marvelous contributions to psychosurgery earned him the prestigious Nobel Prize for Medicine in 1949.
🔹Moreover, his lobotomies became a mainstay of treatment, until the antipsychotic drugs were born in 1960.
🔹Besides, he was a prolific author who published around 61 scientific articles and two book on cerebral angiography.
🔹On his birth centenary in 1974, his portrait, the leukotome and cerebral angiogram was commemorated in Portugal stamps.
🔹Unfortunately, Dr. Moniz became paraplegic after near-fatal gunshots fired by a schizophrenic patient at his age of 65 years. But still he survived, confined in a wheelchair and lived up to 81 years.