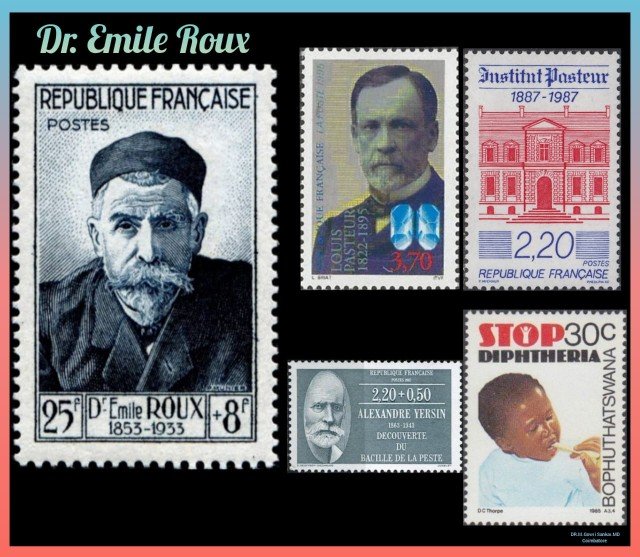 🔹Roux lost his parents at his very young age of eight years. He found solace in the great works of classical literature. He used to read about ancient Greek philosophers and inturn asked himself what he “could do to uplift humanity.”
🔹He then studied medicine at the Medical School of Clermont-Ferrand in 1872. After completing his studies, he joined Louis Pasteur in Paris as a Research Assistant in the Pasteur’s laboratory.
🔹Subsequently, Roux collaborated with his colleague Charles Chamberland and together they extended their support to Pasteur in respect of Sheep cholera, Anthrax and Rabies vaccination.
🔹Furthermore, Dr. Emile Roux had collaborated with Dr. Alexandre Yersin and done remarkable work in studying the bubonic plague – known as “The Black Death.”
🔹Thereupon, they described that toxins produced by C.diphtheriae is responsible for the illness of diphtheria and not the bacillus alone.
🔹Also, he had taken the responsibility for the production of anti-diphtheria serum in Pasteur’s Institute, which became the first effective therapy for this disease.
🔹In fact, Dr. Roux had started his career at Louis Pasteur as an assistant, then became a Pioneer in Bacteriology and Immunology, and finally served as a Director of the Pasteur Institute. He spent around fifty years of his life in Pasteur’s Institute.
🔹He lived up to 79 yrs. When he was taking his last breath, with only one hour left to live, he yelled-out these words from his bed – “Are we working in the laboratories? We have to work…”