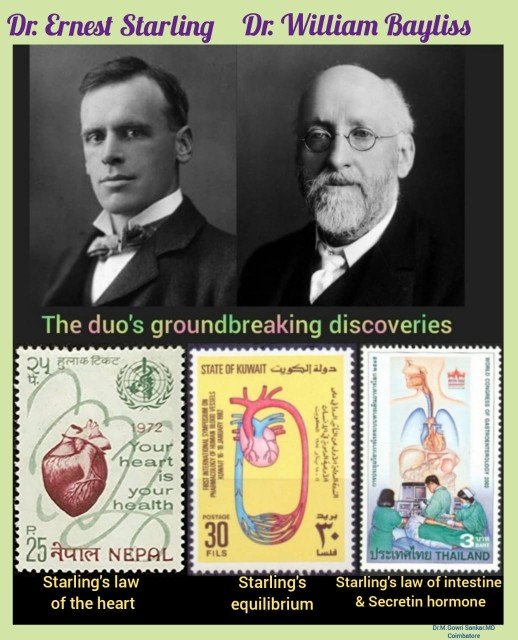 🔹Ernest Starling was born in London. His father was a barrister at Bombay, British-India. He used to return to England once in every three years. Her mother remained in Britain to take care of him.
🔹Starling studied medicine at Guy’s Hospital Medical School, London and graduated in 1889.
🔹After his studies he got appointed as a Demonstrator in physiology at his alma mater and began his part time work in a laboratory at University College, London. Subsequently, he commenced his scientific partnership there with Dr. William Bayliss, who was working at University College.
🔹Later, Dr. Bayliss married Starling’s sister in 1893 and therefore they became brothers-in-law.
🔹All over his scientific career, Dr. Starling was associated with his brother-in-law Dr. William Bayliss.
🔹In fact, together, they started their career by focusing on the physiological studies in cardiovascular system. By using the capillary electrometer, the duo were the first to report the successful recording of the electrical activity of a mammalian heart in 1891.
🔹They further found and were the first to demonstrate that the contraction of the mammalian heart began at the base and proceeded to the apex.
🔹Also, they started their extensive research on capillary function. They demonstrated the concept of fluid shift in the body and described the Role of Hydrostatic pressure and Oncotic pressure at capillary level – and then named it as Starlings Equilibrium.
🔹After that, they studied the gastrointestinal tract and invented the innervation of small intestine and revealed the peristalsis. They further stated the “Starling’s Law of Intestine” as the food causes a band of contraction proximally and relaxation distally, which results in peristalsis wave.
🔹In the year 1902, they proposed that the duodenal mucosa secrets “Secretin,” which excites pancreas. Secretin is the First Hormone isolated in the human body.
🔹Furthermore, they published that landmark manuscript in Journal of Physiology as “The Mechanism of Pancreatic Secretions”.
🔹In 1905, Dr. Starling coined the term Hormone which was adapted from Greek word – to set in motion.
🔹Actually, the introduction of the concept hormone led to the Foundation for the Development of Endocrinology.
🔹Moreover, they discovered the role of distal convoluted tubules of the kidney in absorbing water and various electrolytes.
🔹In 1915, Dr. Starling refocused on cardiovascular physiology. He presented his famous “Starling law of the heart” and published Starling’s curve, a graphical relationship between cardiac output, stroke volume and mean atrial or ventricular end diastolic pressure.
🔹He was also a prolific author – published his classic The Principles of Human Physiology, in 1912, which has 1423 pages.
🔹His extreme contribution to the advancement of Physiology earned him the Royal Medal.

An Eminent Scientist in the Golden Age of Physiology