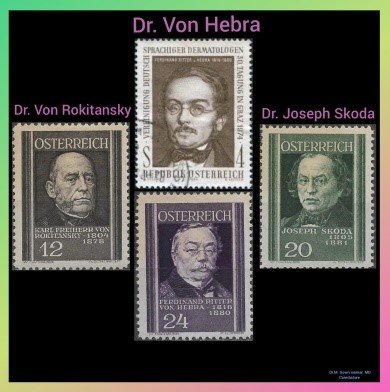 🔸Von Hebra pursued medicine in Vienna Medical School and graduated in 1841. While studying, he was highly inspired by his teacher Dr. Karl Von Rokitansky, who is one of the Founder of Modern Pathological anatomy.

🔸After his studies, he got appointed in Dr. Joseph Skoda’s chest clinic. There Dr. Skoda noticed his keen interest on neglected skin disease patients. Thereby Dr. Skoda promoted him as an incharge for the division of skin diseases and further encouraged him to study dermatology extensively.

🔸Subsequently, Dr. Hebra began his research and was the first to successfully identify the causative mite Sarcoptes scabiei of Scabies and produced the first case report about Rhinoscleroma.

🔸He further described many other skin diseases such as impetigo, lupus, lichen, erythema, syphilitic skin lesions.

🔸Furthermore, he founded the New Vienna School of Dermatology and he became its first Professor of Dermatology in 1869. He gained popularity during his period and thus used to get students from all over the world who wanted to get trained in dermatology.

🔸He also authored the most influential dermatology book of all times – “Atlas of Skin Diseases” – with classical illustrations, which were prepared by two Austrian Medical Illustrators.

🔸Moreover, he was a good friend of Dr. Ignaz Simmelweis. Later Dr. Hebra’s book was translated and revised by his son-in-law Dr. Moritz Kaposi.

🔸Undoubtedly, Dr. Hebra had laid the foundation of present-day dermatology and developed a well-defined branch of medical science.

🔸After his death, he was buried in the same cemetery of Dr. Rokitansky and Dr. Skoda. Thus the triumvirate remain together for eternity.

The Man Who Marked the History of Dermatology