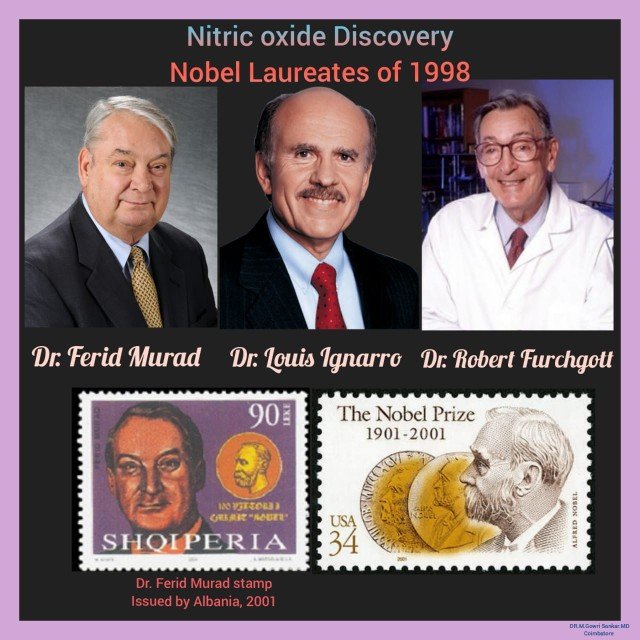 🔹Dr. Murad earned his undergraduate degree in premedical science and chemistry from DePauw University in 1958
🔹Then received his MD and Ph.D. in Pharmacology from Case Western University in 1965. He is one of the first to pursue the combined degree MD-Ph.D. in the United States.
🔹He further completed his internship and residency in Medicine at Massachusetts General Hospital, Boston in 1967 and then he served as a researcher at the National Heart and Lung Institute.
🔹Later, he became a Director of the Department of Clinical Pharmacology at the University of Virginia School of Medicine and was then promoted to Chairman of Medicine at Stanford University.
🔹In the capacity of a researcher, he has devoted his entire life to the study on “Nitric Oxide.” As a result, he demonstrated that in Nitroglycerin and other related drugs the release of nitric oxide into the body relaxed the smooth muscle of blood vessels by elevating intracellular cyclic GMP.
🔹Subsequent to Murad’s work, Dr. Robert F. Furchgott further added the signaling process and discovered the effect caused by a mysterious Endothelium-Derived Relaxing Factor (EDRF).
🔹The pieces of puzzle were finally solved by Dr. Louis Ignarro, who found that the properties of Nitric oxide were same as those seen in EDRF. Then he concluded that Nitric oxide is nothing but the EDRF.
🔹Consequently, all the three scientists were honoured with shared Nobel Prize of Medicine or Physiology in 1998 for discovering that nitric oxide acts as a signaling molecule in the cardiovascular system.
🔹Furthermore, Dr. Murad has been honoured with The Albert Lasker Award for Basic Medical Research. It’s an award used to present annually to recognize the breakthroughs in the understanding, diagnosis, treatment and prevention of human disease.
🔹His devoted work has made Dr. Murad to be celebrate as the “Father of Nitric oxide.”
🔹With great love of science, he declared that “Scientists by nature have to be curious to answer questions of nature – to discover how things work.”

A True Legend and Scientific Researcher