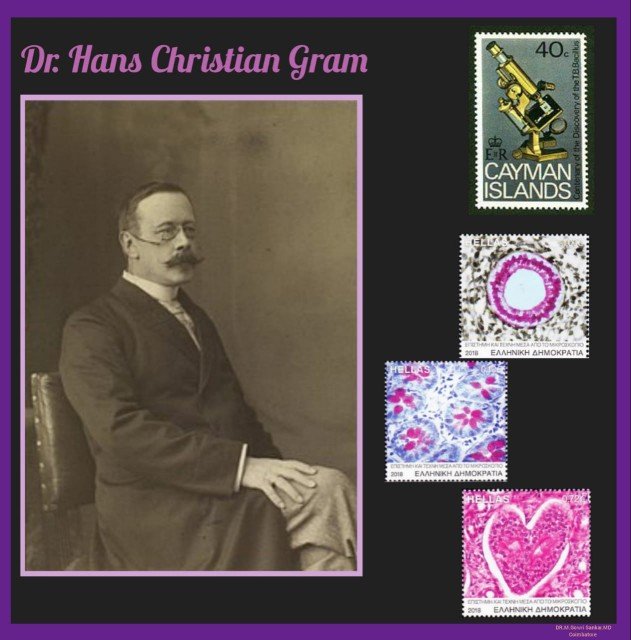 🔸Gram studied natural science at the University of Copenhagen and began his career as an assistant in botany, which gave him the opportunity to learn the fundamental use of microscope.
🔸Thereupon he got interested in medicine, hence he studied medicine at the University of Copenhagen and received his MD graduation in 1878.
🔸He then went for a study trip to Europe from 1878 to 1885 to learn about pharmacology and bacteriology.
🔸Gram was very keen in his microscopic work. As a result, he was the first to recognise the macrocytes, which is a characteristic of pernicious anaemia.
🔸Thereafter in the year 1884, he worked in the laboratory of the well-respected microbiologist, Karl Friedlander in Berlin who was well known for his famous discovery of infectious organism – the Friedlander’s Bacillus.
🔸While Gram was examining the lung tissues of patients who died of pneumonia, he developed his famous microbiological staining method.
🔸Subsequently, he experimented with pneumococci bacteria by Modifying Ehrlich’s alkaline aniline solutions.
🔸He stained his preparations with crystal violet, adding Lugol’s solution and removed the nonspecific attributed stain with absolute alcohol, then he identified that certain bacteria retained purple color under microscope.
🔸Consequently, he gained an international reputation for his groundbreaking work on the development of staining bacteria and made it more visible under a microscope.
🔸 Furthermore, he stated in his initial publication his words of wisdom – “I have therefore published the method, although I am aware that it is yet very defective and imperfect; but hoped that it can be in the hands of other investigators and it will turn out to be useful.”
🔸In fact, Gram had not used counterstain in his procedure. Few years later, it was Dr. Carl Weigert, a German pathologist who added the final step of red counterstain with safranin to stain Gram-negative bacteria.
🔸Gram’s staining technique is still used as the most important method for distinguishing between the two major groups of bacteria.
🔸The bacteria that turns purple when stained are called as Gram-positive, whereas those turns red when counterstained are called as Gram-negative.
🔸Subsequently, his method has became a standard procedure in medical microbiology.
🔸Later in 1891, he was appointed as Professor of Pharmacology at the University of Copenhagen and then became a Chief physician in internal medicine. Furthermore, he published his four volumes of clinical lectures.

A Physician with Scope and Microscope