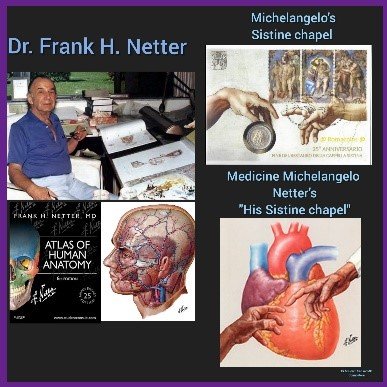 🔸During the school days, Netter used to spend his evenings learning arts in an academic centre.

🔸But, his parents disapproved his artist career and urged him to become a physician.

🔸Hence, he left his interest of becoming an artist and went to study medicine at New York University School of Medicine and then completed his internship in 1933.

🔸While on medical training, he was also freelancing and illustrating paintings for his friends, professors and pharmaceutical companies. This brought him a great deal of attention.

🔸In 1936, he gave up his clinical practice and joined CIBA Pharmaceutical Company (now Novartis) and started publishing his illustrations in brochure, magazines and text books.

🔸During his prolific career, he made revolutionary discoveries in modern medicine. He was the first to illustrate the first open heart surgical operations, the first organ transplants and the first human joint replacement.

🔸His admiring illustration paintings published in the name of “The Netter Collections of Medical Illustrations” as 13 Volumes consists of anatomy, physiology and pathology of all the systems comprising the human body.

🔸Moreover, he made a crowning achievement by publishing his first edition of the The Netter’s Atlas of Human Anatomy in 1989, which contains all his anatomical paintings and diagrams.

🔸Later, the atlas became the most popular and the best-selling anatomy atlas in the world, and was translated into 11 languages.

🔸Dr. Netter, himself acknowledged his Anatomy Atlas book as “His Sistine Chapel.”

🔸Undoubtedly, throughout his distinguished career of six decades, he produced more than 4000 illustrations, which became a standard reference material – educating generations of medical students in medical schools around the world.