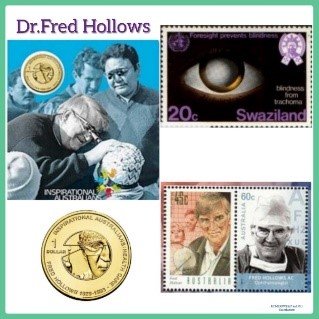 🔸Fred Hollows was born in Dunedin, New Zealand. During his school summer holidays he enrolled for work at a Mental Health Hospital. There he was highly inspired by the work of physicians. As a result, he enrolled at Otago Medical School, Dunedin.

🔸After his studies, Dr. Fred returned to Australia and served as an Associate Professor of Ophthalmology at the University of New South Wales in Sydney.

🔸During 1968, Dr. Fred was shocked to see the indigenous Aboriginal Australian children and adults who visited his clinic suffering from blinding trachoma.

🔸As trachoma is highly contagious, he immediately travelled to northern territory of Australia, where the Aboriginal Australians live. There he was stunned to see thousands of people suffering from trachoma.

🔸All this inspired Dr. Fred to work for the betterment of the trachoma affected patients. So, he stayed there for 3 years and arranged 9 team of 80 doctors and visited 465 remote communities in outback Australia.

🔸The team examined 60,000 indigenous people and treated around 30,000 patients affected by trachoma including 10,000 Ophthalmic surgeries.

🔸Meanwhile, Dr. Fred got appointed as the Director of the Government funded National Trachoma and Eye Health Program.

🔸Further on behalf of World Health Organisation, he visited to many countries such as India, Nepal, Sri Lanka, Burma to train the local doctors to perform eye surgeries.

🔸Unfortunately in the year 1987, he was diagnosed with renal cancer but he still wanted to do more…

🔸During the last few months of his life, he travelled to Vietnam to train over 300 Vietnamese Ophthalmologists in modern eye surgery techniques.

🔸Ultimately, he was honoured for his meritorious and selfless service with many significant awards…

🔅 Rotary Award for World Understanding in 1993.

🔅 Albert Schweitzer Award of Distinction in 1993.

🔸Five months before his death, he launched The Fred Hollow Foundation to ensure that his work continued in the future.

🔸Today, the Foundation serves in more than 25 countries and has restored the sight of millions of people worldwide. Certainly, Dr. Fred has became a proof that one person can take the world to a better place.

A Man with Unstoppable Vision