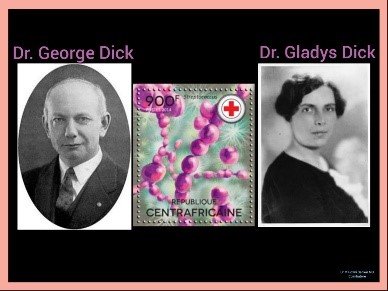 🔸Dick completed his medical studies from Rush Medical College of Chicago and got his MD graduation in 1905. He then travelled to Vienna and Munich to get trained in bacteriology.

🔸He was quite brilliant at academics, which led to him becoming a Professor of Clinical Medicine at Rush Medical College, where he served there from 1918 to 1933. He was subsequently promoted to Head of the Department of Medicine at University of Chicago.

🔸During the early 20th century, Scarlet fever was the leading cause of death among children and also caused long-term complications such as arthritis, nephritis and rheumatic heart disease.

🔸This scenario had burdened Dick’s heart very much, so he began his extensive research on Scarlet fever while he was serving as an Army doctor in First World War.

🔸After the war, he collaborated with his wife Dr. Gladys Dick and made a great breakthrough by isolating the causative organism Haemolytic streptococci by using Koch’s postulate and also narrowed down the culprit as a specific toxin produced by these bacteria in 1923.

🔸In 1925, they together developed “Dick Skin Test” to determine susceptibility to scarlet fever. They did this by injecting Purified Soluble Exotoxin from haemolytic streptococcus pyogenes.

🔸By using the Antitoxin, they further developed Vaccine to fight against the disease.

🔸Finally, both were honoured by various awards for their extraordinary contribution to the field of medicine.