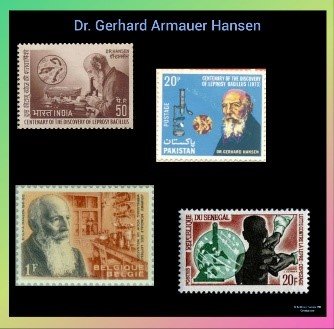 🔸Hansen studied medicine at the University of Oslo, Norway and then graduated in 1866.

🔸After his studies, he returned to his hometown, Bergen. At that time, Bergen was severely fighting against leprosy and was functioning as a main research centre with three leprosy hospitals.

🔸During his period, leprosy was believed to be a hereditary disease or a curse given by God – so lepers must suffer for their sins. Whereas, Dr. Hansen was very keen in researching and dedicated his whole life to research on leprosy.

🔸 In 1869, Dr. Hansen published his first investigation on Pathological changes in lymphoid tissue and applied the term Infectious substances seen in lymph nodes of lepers.

🔸But his work was primitive and furthermore his poor equipment complicated the work. Therefore, he travelled to Vienna for advanced training and histopathological studies, which enabled him to strengthen his research technique.

🔸Dr. Hansen sat continuously for days looking at the stained tissue slides through the microscope.

🔸At his age of 32 in the year 1873, he successfully identified the rod shaped bacilli inside the cell in leprous skin nodules and then he published his historic work. It was the second specific disease causing organism to be discovered (first was Anthrax bacilli by Dr. Koch).

🔸Also, he was the first investigator to suggest that microorganism could cause human diseases. But he was criticized for his work.

🔸In 1880, he declared the name Bacillus Leprae to be the causative organism.

🔸Moreover, Dr. Hansen produced the first systematic scientific work on leprosy of the eye and published a book called “The Leprosy Disease of the Eye.”

🔸His in-depth investigations and experiences made him the Physician-in-Chief for all lepers in Norway. The amended act 1885 ordered authorities to allow lepers to live in Precautionary isolation away from the unaffected society and this led to the quick reduction in burden of leprosy.

An Eminent Scientist of 19th Century