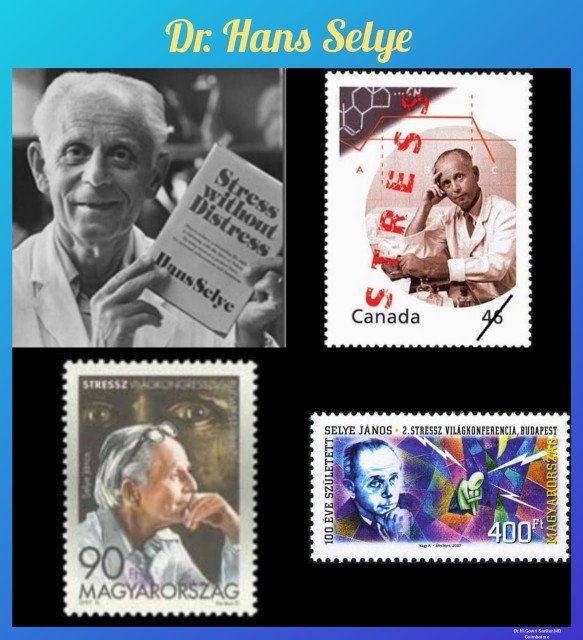 💠Hungarian-Canadian Endocrinologist
💠Father of the Field of Stress Research

🔹Selye studied medicine at German Medical School in Prague and later earned a Doctorate in organic chemistry during 1929.
🔹After completion of his studies, he emigrated to United States and joined to work at Johns Hopkins University on Rockefeller Foundation Scholarship in 1931.
🔹During his medical studies, he had observed that patients with various chronic illnesses appeared to display the syndrome of being sick. This might have been his first step in recognition of “stress.”
🔹Afterwards, he joined the Universite de Montreal, where he founded the Institute of Experimental Medicine and Surgery. He was the Director there with 40 assistants and continued his research to find the issue of stress with 15,000 laboratory animals.
🔹In fact, he was the one who coined the term “Stress.”
🔹As a first step of his research, he demonstrated the stress triad of gastrointestinal ulceration, thymic lymphatic atrophy & adrenal hypertrophy.
🔹He further elaborated the theory that the stress plays a role in every disease and then that lack of coping with or adapting to stressors can produce “Diseases of adaptation,” which includes ulcers, high blood pressure and heart attacks. He called his theory as “General Adaptation Syndrome.”
🔹Subsequently, he was the first to describe the role of Hypothalamic-Pituitary-Adrenal axis in stress.
🔹Ultimately, the outline led directly and indirectly to the discovery of the steroids ACTH, GRH, somatostatin and other hypothalamic and hypophyseal releasing factors and hormones, which laid the ground work for endocrinology.
🔹Furthermore, Dr. Selye published more than 1,700 articles and 39 books on stress. “The Stress of Life” and “Stress without Distress” were the international bestsellers.
🔹His significant contribution has made Dr. Hans Selye the “Father of the field of stress research.” Moreover, he gained the world-wide recognition for introducing the concept of stress.

A Physician With Incredible Curiosity Coupled with a Thirst of Knowledge