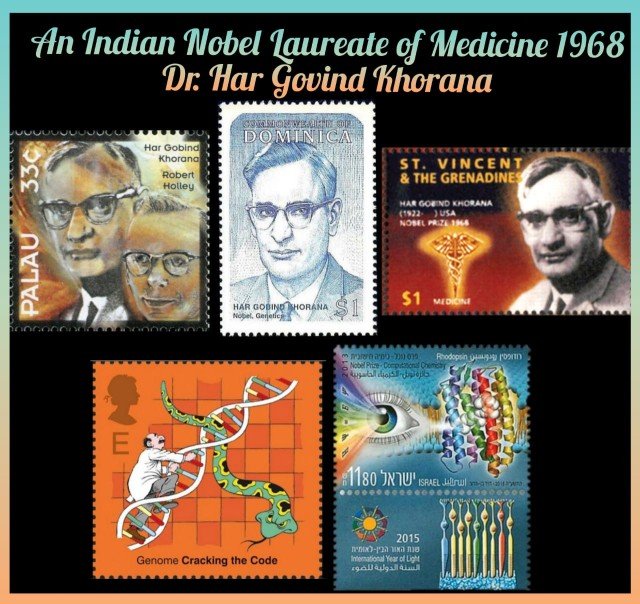 🔹Har Gobind Khorana was born in a village called Raipur in Punjab in British India.
🔹His parents were native Indians and his father was a village Agricultural Taxation Clerk in the British Indian government. His family was the only literate family in the village at that time.
🔹Khorana completed his Bachelor degree and Master of Science from the Punjab University with the help of scholarship.
🔹Then he moved to England to study organic chemistry at the University of Liverpool on a Government of India Fellowship. He completed his PhD in 1948.
🔹After completion of his studies, he received a job offer from Dr. Gordon M. Shrum, a Canadian scientist in the University of British Columbia. Khorana was actually inspired by him so he wanted to involve himself in all of his researches.
🔹In 1960, Khorana accepted the Job position offered by the Institute for Enzyme Research at the University of Wisconsin. By the support of his team of researchers, Khorana was very successful in developing the methods for synthesizing phosphate ester derivatives of nucleic acids.
🔹Subsequently, he collaborated with John G. Moffatt in the year1959 and discovered the synthesis of acetyl coenzyme A (acetyl CoA) – it’s a molecule essential to the biochemical processing of proteins, fats and carbohydrates.
🔹Later in 1960, he delved deeper into his experiments in nucleic acids found in RNA. Basically, RNA is composed with four chemical bases represented by the letters A, C, U, and G.
🔹By chemical bases, Khorana had deduced that the code for serine was UCU and for leucine it was CUC. He further proved that the genetic code consisted of 64 distinct three-letter words. Thereby, he uncovered the genetic code and first to synthesis oligonucleotides (strings of nucleotides).
🔹Ultimately, Khorana was honoured with shared Nobel Prize for Medicine in 1968 along with other two biochemists Marshall W Nirenberg and Robert W Holley from the University of Wisconsin, for their work on nucleotides in nucleic acids, which carry the genetic code of the cell and its function in protein synthesis.
🔹Moreover, Khorana is credited with another scientific breakthrough – he was very successful in constructing the “First Ever Artificial Gene” in a yeast cell during 1972. In order to reward his tremendous discovery, he was awarded with National Medal of Science during his lifetime.
🔹Thereafter, he turned his research focus on the cell signaling pathways of vision in vertebrates. In fact, he studied the structure and function of Rhodopsin, a light-sensitive protein found in the retina. He also investigated the mutations in rhodopsin, which are associated with Retinitis pigmentosa.
🔹Today, his discovery of Oligonucleotides has became the essential tool of biotechnology and widely used in biology labs for sequencing, cloning and genetic engineering.

An Indian Scientist with Extraordinary Drive

An Icon of Molecular Biology