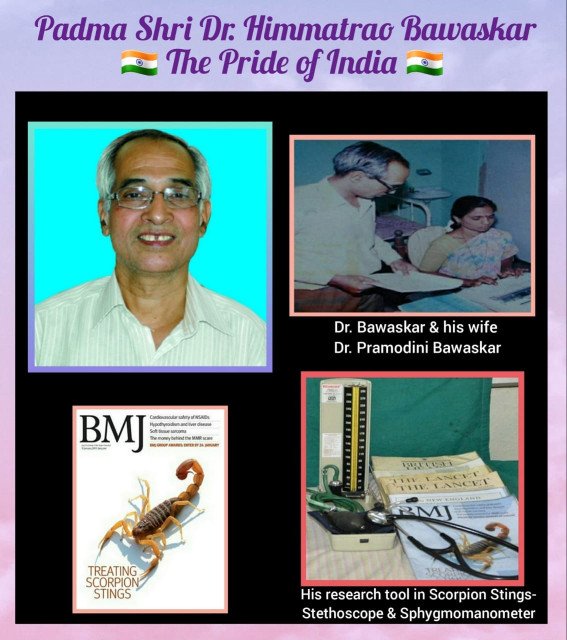 🔸Bawaskar was born in an agrarian family in a small village called Dehed in Jalna District,  Maharashtra. He was the first person in the family to get educated. Though he lived in a poverty-stricken state without any financial resource yet he was determined to study well.

🔸To meet the expense for his education, he did various odd jobs as a waiter in hotels, sweeper in temples, paperboy and sold books, diaries and calendars at bus stop.

🔸He secured high marks and enrolled to study medicine at Nagpur Medical College.

🔸Being an empathetic doctor, he joined as a medical officer in Primary Health Centre (PHC) in a remote village Birwadi in Raigad district.

🔸There he witnessed many villagers being stung by the most lethal red scorpion Mesobuthus Tamulus.

🔸With the knowledge he gained from few articles on scorpion sting, Dr.Bawaskar started treating poor farmers in his PHC.

🔸He spent sleepless nights treating patients. While monitoring the patients, he observed the march of clinical events and concluded that the immediate cause of death was due to pulmonary edema. In spite of trying various course of treatments, the mortality was high.

🔸Dr. Bawaskar finally found that he must gain more knowledge in emergency care. So, he enrolled at B. J. Medical College, Pune and completed his MD in 1982.

🔸He volunteered to serve in PHC Poladpur at Raigad district to continue his research on scorpion sting. His wife Dr. Pramodini Bawaskar supported his research endeavour.

🔸The doctor couple successfully treated a 7 years old child who was stung by a red scorpion. The child was admitted with all signs and symptoms, progressing to pulmonary edema. They treated the child for 24 hours and successfully saved the child’s life by using the drug sodium nitroprusside.

🔸His case study on scorpion sting was rejected by an Indian Journal. Later he approached The Lancet. In 1982, his landmark research article was published in The Lancet under the title Diagnostic Cardiac Premonitory Signs and Symptoms of Red Scorpion Sting. Here, he elaborated the sting causing heart failure and management with sodium nitroprusside.

🔸Further, the doctor couple had made a groundbreaking discovery by using the drug Prazosin, an alpha blocker to reverse the refractory pulmonary edema. Thereby, they reduced the fatality from 44% to <1%. This landmark case trial was again published in The Lancet, in 1986 under the title “Prazosin in Management of Cardiovascular Manifestations of Scorpion Sting.”

🔸Furthermore, he established a research center at Mahad named Bawaskar Hospital and Research center. Here, he carried out extensive research to find solutions to the neglected tropical diseases which were rampant in rural areas.

🔸Over the years, he published more than 100 research articles regarding health problems of rural population across India and also pioneered in other areas of study, including:

🔅Dental fluorosis due to high fluoride in drinking water.

🔅Vitamin D and Serum B12 level in rural population.

🔸His articles and writings got published in many Indian and International journals and text books including JAPI, British Heart Journal, NEJM and API Text book of Medicine.

🔸His immense service to the rural population was finally well recognized and he was offered many awards including Government of India’s fourth-highest civilian award Padma Shri in 2022.

🔸He did an extensive research by spending his own money without seeking financial assistance from others. Dr. Bawaskar is the true son of mother India and an ideal role model for younger generation of physicians in India.

The Man of Perseverance & A Prolific Researcher