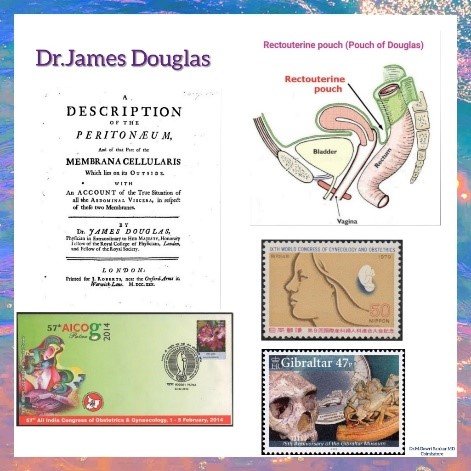 🔹James Douglas was born in Scotland. He studied medicine and graduated from Reims University in 1699.

🔹After his studies, he moved to London in 1700. There he did his extensive studies on both human anatomy and comparative anatomy on birds, reptiles, fish etc. Thereby he became one of the most important anatomists of the eighteenth century.

🔹Actually, he made the study on human anatomy interesting by introducing the meticulous and scientific methods.

🔹In the capacity of an anatomist, he introduced the true idea of the fold of peritoneum and further investigated the arrangement of the peritoneum in relation to the several viscera of the abdomen.

🔹Also, he did an extensive investigation on Female Pelvic Anatomy and also practiced midwifery as an obstetrician.

🔅 Douglas pouch – Peritoneal space formed by deflection of the peritoneum.

🔅 Douglas fold – A fold of peritoneum forming the lateral boundary of Douglas’ pouch.

🔅 Douglas line – The arcuate line of the sheath of the rectus abdominis muscle.

🔅 Douglas septum – The septum formed by the union of Rathke’s folds, forming the rectum of the fetus.

🔅 Douglas abscess – Suppuration in Douglas pouch, most often seen in appendicitis or adnexitis.

🔹Dr. Douglas also published “Bibliographiae Anatomicae,” a list of writers on anatomy from Hippocrates to Harvey in 1715, which was the first real anatomical bibliography.

🔹One of his outstanding pupil was William Hunter, who became a leading teacher of anatomy and a skilful obstetrician of his day.

🔹Moreover, Dr. Douglas was famous for his “Osteographia,” an anatomical illustration on skeleton and anatomical collections. After his days, most of his anatomical specimens, drawings and books were exhibited in Hunterian Museum of the Royal College of Surgeons in London.