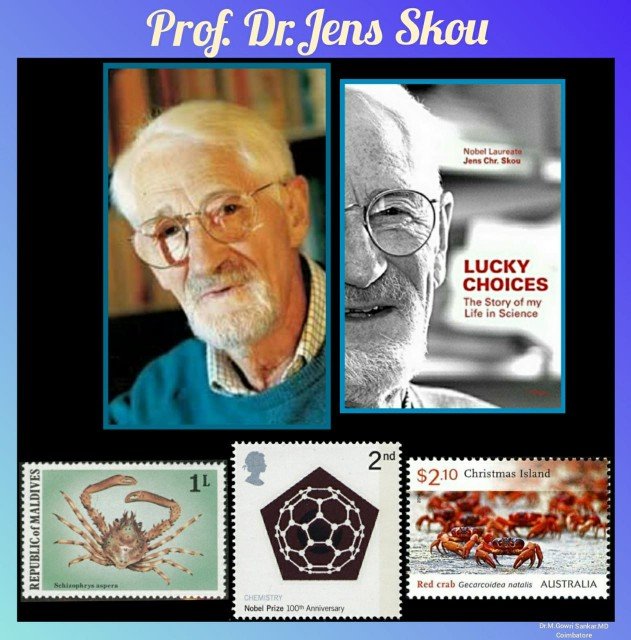 🔹Skou studied medicine at the University of Copenhagen in 1944 and then did his Ph.D. in Physiology at Aarhus University in 1954.
🔹After completion of his studies, he joined at the Aarhus University and started his research.
🔹Subsequently, he became a Professor of Physiology in 1963 and then became a Professor of Biophysics in 1977 in the same institute. He served there until his retirement in 1988.
🔹In fact, Dr. Skou became well known for his discovery made in 1957. While on research, his interest turned to the biological cell.
🔹Therefore, he studied about the Nerves of Crab Leg🦀 that led to the discovery of the enzyme called Na+-K+ ATPase, which acts as a pump responsible for the active transportation of the sodium and potassium across the cell membrane.
🔹Then he published his research in the journal in 1957. For his research, he had experimented on about 25,000 crabs that he received from local fisherman to study their nerve fibres.
🔹Finally, after 40 yrs of his discovery, Dr. Skou was honoured with the Nobel Prize for Chemistry in 1997. However, he shared this honour with Paul D Boyer and John E. Walker, who had conducted the ATP related research independently.
🔹Moreover, his work on cell physiology became a cornerstone in understanding the function of sodium- potassium pump to maintain the electrical charge within the cell, transmission of nerve impulse, contraction of muscles and its integral in maintaining the acid-base balances.
🔹His tremendous work paved the way for understanding many other diseases.

A Scientist who Inspired a Large Field of Research