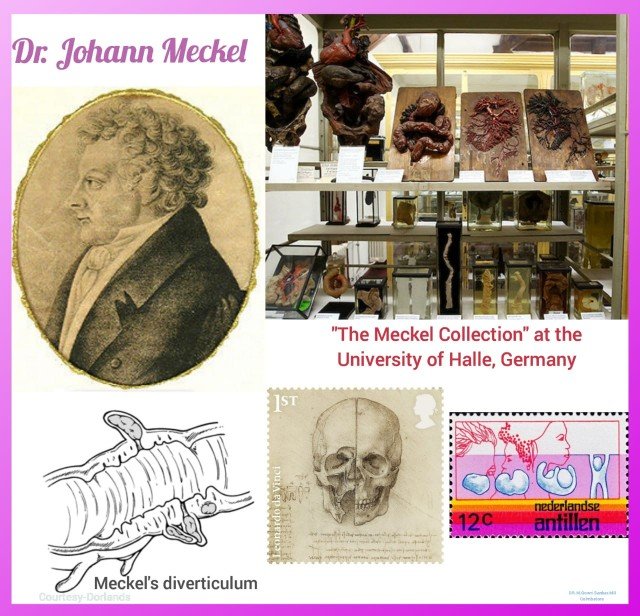 🔹Meckel was born in a familial medical dynasty and he got his grandfather’s name, who was a Professor of Anatomy in Berlin. His father, Philipp Friedrich Theodor Meckel was an Anatomist. Likewise, his brother and nephew were anatomists.
🔹Meckel also joined to study medicine at the University of Halle, Germany in 1802.
🔹In 1808, he became a Professor of various fields as Anatomy, Surgery and Obstetrics at the University of Halle and he was celebrated as one the most outstanding figures in the history of anatomy and medicine of early 19th century.
🔹He further did an extensive and meticulous work on comparative study of abnormal embryological specimens, which he collected from all over the world.
🔹Moreover, he was a prolific investigator and founder of the “Science of Teratology” – it’s about the study of birth defects and abnormalities that occur during embryonic development.
🔹Also, one of his books called “Meckel’s Handbook of Pathologic Anatomy” has became the classical textbook of scientific teratology.
🔹Additionally, he had written several treatises on comparative anatomy on humans and animals. He published his work called “The Contributions to Comparative Anatomy” in the year 1811.
🔹His Eponyms…
🔅 Meckel’s diverticulum – A common congenital sacculation of the antimesenteric border of the ileum, which was described in 1809.
🔅 Meckel’s cartilage – A cartilaginous bar present in the first pharyngeal arch, acting as a template for the future position of the mandible and contributing the malleus and incus of the middle ear.
🔅 Meckels plane – A craniometric plane cutting the alveolar and auricular points
🔅 Meckel-Serres Law – A recapitulation theory in embryology.
🔅 Meckel-Gruber Syndrome – A lethal malformation syndrome in fetus with typical triad of meningo-encephalocele, polycystic kidneys and polydactyly.
🔅A protein – Mecklin or MSK1, MSK 2 & MSK 3 gene which is found in chromosome 17, 11 & 8 causing Meckel-Gruber syndrome is named after him.
🔅 Meckel’s scan – A diagnostic imaging using Technetium-99m to detect the ectopic gastric mucosa in intestine.
🔹 “The Meckel Collection,” which comprised around 8000 anatomical specimens, was housed at the University of Halle, Germany and is one of the largest anatomical collections of the world.
🔹Thus, Dr. Johann Meckel became a famous anatomist and embryologist of the 19th century.