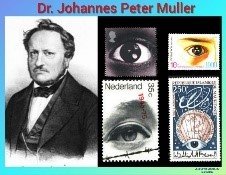 🔹Muller was born as the son of shoemaker. He was very talented at his young age and made his own translation of Aristotle.

🔹Later he became a Professor of anatomy and physiology in University of Berlin, Germany.

🔹Muller contributed in numerous Domains of physiology, especially in Speech, voice and hearing as well as in Physical and chemical properties of blood, chyle and lymph.

🔹Moreover, he carried out the comparative physiology of human and animal visual sense and eye movements.

🔹He was the first to describe the relationship between Accommodation and Vergence, and Accomodative Esotropia in 1826.

🔹Dr. Theodor Schwann, a German physiologist spent four years under the guidance of Dr. Muller and with his support in his experimental work, he discovered the Schwann cells.

🔹Muller also encouraged aspiring physiologists like Charles Bell and Magendie on their experimental work. Muller confirmed their work, and this led them to introduce the “Bell-Magendie Law.”

🔅 Muller’s Law – each type of specific nerve ending gives rise to its own specific sensation.

🔹Additionally, he authored the two-volume book “Elements of Physiology,” which was published in 1837 and 1840. It was a leading textbook of physiology in the 19th century.

🔹Consequently, Dr. Muller is considered the Father of German Physiology and as a teacher he inspired a generation of researchers such as Hermann von Helmholtz, who invented Ophthalmoscope and Rudolf Virchow, an eminent pathologist.