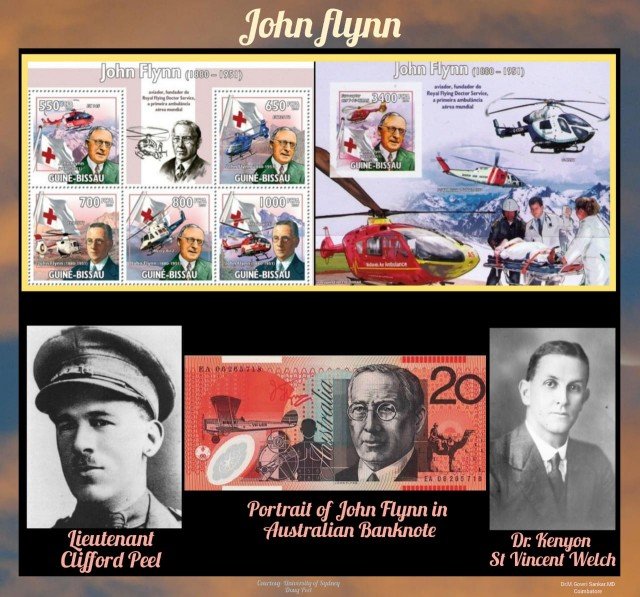 🔹John Flynn was born in a small town in Central Victoria, Australia. Since his mother expired during childbirth, Flynn was brought up by his mother’s sister in Sydney.
🔹After his school days, he studied theology at Ormond College at the University of Melbourne. Simultaneously, he was working at Church Home Missionary Centres. He graduated in 1910 and became a Minister of the Presbyterian Church.
🔹In fact, Flynn was quite interested in doing the missionary work in rural and remote areas of Australia.
🔹During his missionary visit, he found that there was no medical care available in remote and uninhabited inland districts of Australia.
🔹This burdened his heart heavily, hence he formed the Australian Inland Mission to serve the medical needs of people.
🔹He was successful in serving the Australian residents in outback. Furthermore, he established fifteen small new hospitals around the outback areas.
🔹During First World War, in the year 1917, Flynn received an inspirational letter from one of the medical students – Clifford Peel of Melbourne University.
🔸 The Storyline of Clifford Peel…
🔹Peel was a medical student during the First World War. He developed an interest in military disciplines and trained as a pilot. Then he voluntarily joined in the newly-formed Australian Flying Corps and started serving in the war.
🔹One day, he got an opportunity to read about the social work of John Flynn. Flynn’s extraordinary service to the native Australian’s in remote area greatly inspired Peel.
🔹Hence, Peel wrote a letter to Flynn to use flights for medical help in remote areas. But unfortunately, Clifford Peel got shot down in the war in France and died at the young age 24 years.
🔹Actually, Peel’s letter might have led Flynn to become the Founder of the world’s first air ambulance.
🔹In March 1928, he launched the first official flight (air ambulance) with the Flying Doctor Service. This later became the Royal Flying Doctor Service of Australia.
🔹Initially, the plane was hired from a company called Qantas. In fact, the first pilot, Arthur Affleck, didn’t navigate the flight with navigational aids and radio, but with the aid of a compass and landmarks such as fences, rivers and river beds. Mr. Flynn was also present in the flight with the very first flying doctor – Dr. Kenyon St. Vincent Welch.
🔹During its inaugural year, his air ambulance flew about 50 flights to 26 destinations and treated around 225 patients.
🔹Ultimately, Flynn was honored with the degree – Doctor of Divinity, which was conferred by the University of Toronto and the Presbyterian College at McGill University, Canada.
🔹Through this experience, Flynn had once remarked “If you start something worthwhile, nothing can stop it.”

A Man with Drive and Vision