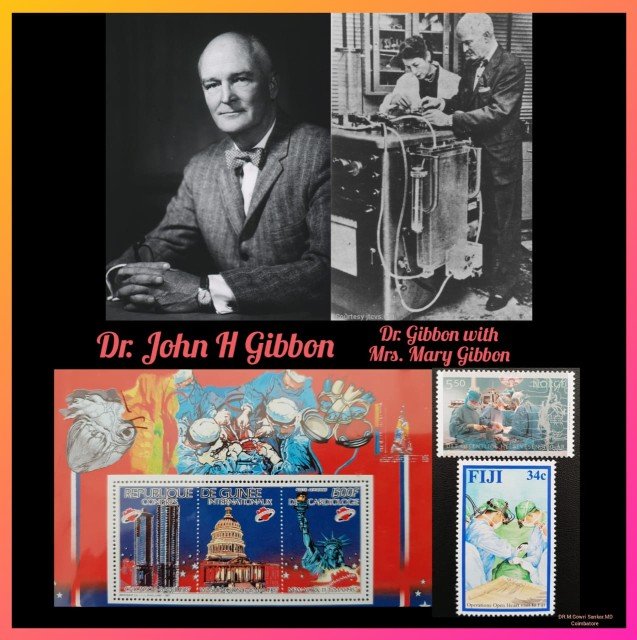 🔹Gibbon was born in a physician family. His father to great-great-grandfathers were all doctors – his father was a surgeon.
🔹Gibbon studied medicine at Jefferson Medical College of Philadelphia, where his father was a professor of surgery. Gibbon received his MD graduation in 1927 and became a sixth generation physician of his family.
🔹After completion of his studies, he did his research Fellowship in Surgery at Harvard Medical School and then began his career as an Assistant Surgeon at Pennsylvania Hospital.
🔹Simultaneously, Gibbon was into research – where he witnessed a patient who had a massive pulmonary embolism. Though the pulmonary embolectomy procedure had done, the patient did not survive, which heavily burdened him.
🔷In fact, he believed that the patient life could have been saved if blood had remained oxygenated during lung procedures. As a result, he started preparing an Artificial Heart-Lung Machine even though he hadn’t have an engineering background.
🔹But unfortunately, his innovative idea was not welcomed and also he was very much criticized. Despite of all this, he continued his invention with the support of his skilled laboratory assistant, Mary. Then, Dr. Gibbon married Mary and therefore she became his close research collaborator.
🔹They both worked together and successfully developed a Heart-Lung Machine and then tested by experimenting on cats.
🔹In 1935, Gibbon was able to keep a cat alive for 26 minutes by his newly invented prototype Heart-Lung Bypass Machine.
🔹After 18 years, he developed a better machine by the technical inputs given from his friend, Thomas J. Watson, who was a chairman of International Business Machines.
🔹On May 6, 1953, Dr. Gibbon performed the first successful open heart procedure, an ASD closure, in a 18-years young patient by using his newly designed Heart-Lung Machine, “Model II.”
🔹By this method, the patient’s heart and lungs were stopped for 26 minutes while surgery was happening for 45 minutes. Thus, Dr. Gibbon proved the performance of his machine.
🔹Furthermore, he continued as the Chief of Surgery at Jefferson Medical College, and had written the standard textbook on “Chest Surgery.”
🔹His marvelous investigation won him many awards including the special “The Lasker Award” during his lifetime.
🔹Other than his invention of Heart-Lung machine, he also pioneered the technology of Cardiopulmonary Bypass Surgery.