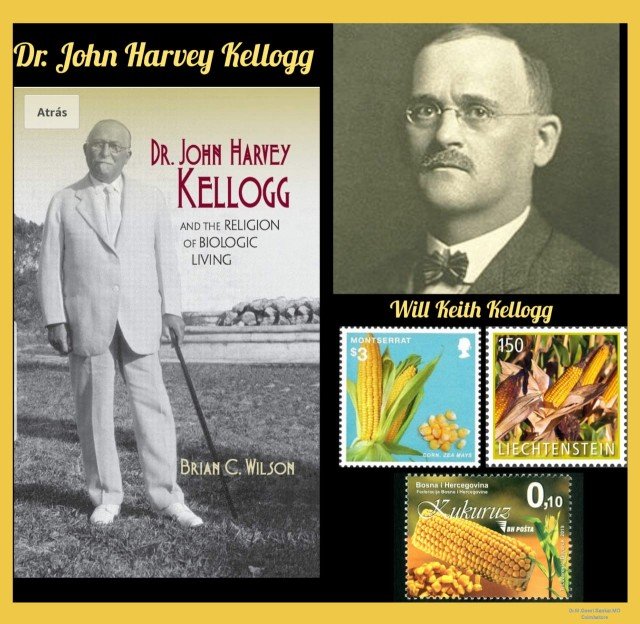 💠American Physician, Nutritionist & Health Reformer
💠One of the Inventors of the Kelloggs Corn Flakes

🔹John Harvey Kellogg was born in Michigan. He studied medicine in both the University Medical School in Michigan and the University Medical College at Bellevue Hospital in New York. He got his medical graduation in 1875.
🔹Dr. Kellogg is well known for his health principles, which became very popular.
🔹To carry forward his health principles, he established and become director of the Battle Creek Medical Surgical Sanitarium in Michigan, where he coined the term “Sanitarium” to suggest both hospital care and the importance of sanitation and personal health. He led the institution until his death in 1943.
🔹He was one of the first proponents of integral medicine and named his health movement as Health Biologic Living.
🔹In his biologic living, he advocated vegetarian diet, abstinence from alcohol and tobacco, promoted exercise, eight to ten glasses of water daily, fresh air, sunlight exposure, good posture and sensible dressing.
🔹In his sanitarium, he also promoted breathing exercise, chewing many times of each bite of food, post meal marches for digestion, phototherapy (artificial sunlight treatment), hydrotherapy (offered 46 different kinds of water baths), foot massager, vibrating chair and colonic irrigators for enema.
🔹By his presentations, Dr. Kellogg proved the benefits of biologic living – “Healthy, comfort, efficiency and long life.”
🔹While he was doing his Sanitarium’s dietary program, his brother Will Keith Kellogg, had joined with his newly invented foods made from grains. In 1894, they had accidentally invented Flaked cereals, and the sanitarium became famous for its wheat and corn flakes🍲. Thereby, Kellogg’s cereals became world famous breakfast cereal.
🔹Moreover, Dr. Kellogg invented a process for making Peanut butter and developed healthy Granose biscuits, which also became world famous.
🔹Further, Dr. Kellogg invented many instruments and devices and earned around 30 patents including the electric blanket, the electric light bath and the universal dynamometer for testing the strength of the muscles.
🔹His instruments also became world famous and most of his instruments were used on the RMS Titanic ship.
🔹He founded the American Medical Missionary College and the Battle Creek College.
🔹In fact Dr. Kellogg was always appeared in a trademark dress code of full white.
🔹Besides, he adopted and reared 42 children and wrote nearly 50 books and edited a major magazine. In addition, during his lifetime, he performed more than 22,000 operations, donated virtually all of his money to charitable organizations and lived in good health age up to 91 years.

The Physician with Extraordinary Compassion