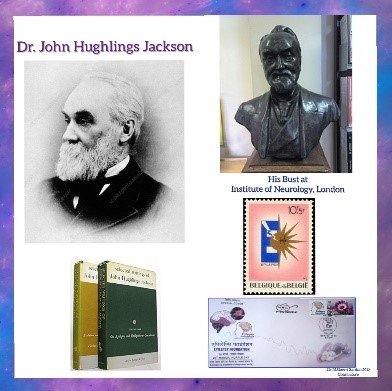 🔹Jackson was born in Yorkshire, England. He studied medicine at York Medical and Surgical School and completed his studies at St Bartholomew’s Hospital, London in 1856.

🔹By the influence of his friend, Dr. Hutchinson, Dr. Jackson got appointed as the Physician in Metropolitan Free Hospital and the Royal London Ophthalmic Hospital in 1859.

🔹Then, Dr. Jackson completed his MD at the University of St Andrews, Scotland in 1860. After his studies, The Duo – Dr. Hutchinson and Dr. Jackson worked for the Medical Times and Gazette as a Medical Journalist for few years in London.

🔹As reporters, they attended many lectures in the teaching hospitals of London.

🔹While attending one particular lecture, Dr. Jackson got inspired by the presentation of Dr. Charles Brown Sequard, the pioneer neurophysiologist and founding physician of the National Hospital for the Paralysed and Epileptic, Queen Square.

🔹It was Dr. Brown Sequard who encouraged Dr. Jackson to get involved in neurology. At that time, there was only little attention being paid to treat neurological diseases.

🔹After gaining 30 years of experience from both of these hospitals, Dr. Jackson laid the foundation for modern neurology. As a scientific clinician his contributions are as follows….

🔅 He studied epilepsy on a pathological and anatomical basis and described seizures are cerebral events in 1863.

🔅 He also proposed the Electrical theory, as epilepsy was the result of erratic electrical discharges of neurons to muscles.

🔅 He further described the patterns of localized convulsive seizures, which starts in the finger, spreads to the hand, arm and into the face. Later Dr. Jean-Martin Charcot named this movement seizures as “Jacksonian Epilepsy“.

🔅 He then studied temporal lobe epilepsy and described the pattern of disease of the cerebellum.

🔅 Also, he contributed to the understanding of the association of aphasia in right-handed persons with disease of the left cerebral hemisphere following stroke. Thereby, Dr. Jackson confirmed the discovery of Paul Broca.

🔅 He was one of the first to state that abnormal mental status may result from structural brain disease.

🔅 Moreover, he was an early adopter of von Helmholtz Ophthalmoscope and one of the first to insist upon the relationship between ocular and cerebral disease. He also recommended the ophthalmoscope as part of every physician’s instrument.

🔹Unfortunately, Dr. Jackson experienced deepest personal sorrow when his wife suddenly died because of cerebral venous thrombosis complicated by Jacksonian focal seizures. The remaining fifteen years of his life he dedicated himself for the development of neurology.

🔹Apart from that, he was being a co-founder of Brain: A Journal of Neurology. It’s first issue was in 1878 and is still being published today.

🔹By associating with Sir William Gowers and Sir David Ferrier, Dr. Jackson founded the National Society for Epilepsy in 1892.

One of the Founding Fathers of Neurology