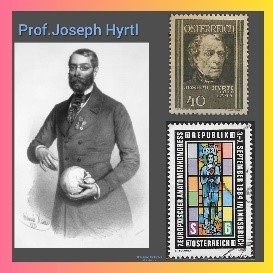 🔸Hyrtl completed his medical studies at Vienna in 1831. While he was a student, he got appointed as a Demonstrator of Anatomy.

🔸He was appreciated for his extraordinary teaching by students as well as professors. At the young age of 26 years, he became a Professor of Anatomy in the University of Prague, Czech Republic.

🔸Subsequently, he used the method to inject coloured substances into the blood vessels and corrode away the organic tissues by acids. The remaining were considered “Three-Dimensional Vessel Networks.“

🔸By using this method, he demonstrated the wonderful preparation of Vascular system of lung, liver, kidney and intestine.

🔸Moreover, Hyrtl was well-known for his collection of skulls. He collected the skulls of different races for the purpose of Comparative Anatomy. The intention of his collection was to prove that cranial anatomy varied widely in races.

🔸His collection of 139 Human Skulls have been exhibited in The Mutter Museum, Philadelphia. There each skull has been mounted with comments about the person’s age, place of origin and cause of death.

🔸 Finally, his classical work was published as A Handbook of Topographic Anatomy in 1860.

🔸During his days, he was a competent teacher and writer. Thereby, he had a significant impact on anatomy in the medical school.

A Magnificent Anatomist of the 19th Century