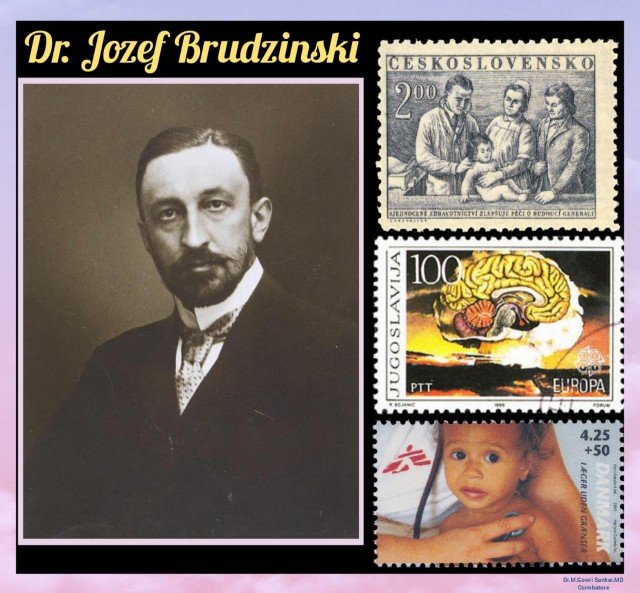 🔸Brudzinski was born in a family with patriotic traditions in a village in Poland.
🔸He studied medicine at Moscow and graduated in 1897.
🔸After his medical studies, he went to Europe on study trip for two years. When he was in Germany, he did his research with Dr. Theodor Escherich, a pioneer in the field of pediatric infectious diseases and also got trained with Dr. Antoine Marfan, who was the first to describe Marfans syndrome.
🔸In fact, Dr. Brudzinski had not only gained subject training but also learned how European hospitals were working.
🔸After his return to Poland, he involved himself in establishing Anna Maria Children Hospital, which was a model hospital of that time. He was also the co-founder of the first Paediatric journal in Eastern Europe – “Paediatric Review.”
🔸Moreover, Dr. Brudzinski was playing significant role in reestablishing the Poland University in Warsaw during World War I in 1915 and became its Director.
🔸But, he is best known for his contribution in the field of neurology – he developed four maneuvers to detect meningitis in children.
🔸His Eponym Maneuvers…
🔅 Brudzinski’s neck sign – Patient on supine position, passive flexion of the neck causes reflective flexion of the hips and knees.
🔅 Brudzinski’s symphyseal sign – Pressure over pubic symphysis leads to knee, hip flexion and leg abduction.
🔅 Brudzinski’s cheek sign – Pressure beneath the zygomatic bone leads to flexion of the forearm and arm.
🔅 Brudzinski’s reflex – Passive flexion of one knee into the abdomen leads to involuntary flexion in the opposite hip and knee.
🔸In 1884, the Russian Physician Dr. Viladimir Kernig published his clinical observation of Kernig sign in meningitis.
🔸Subsequently, Dr. Brudzinski helped diagnose meningitis as well as determine the need for lumbar puncture and early empirical antibiotic therapy.
🔸These two eponyms – Kernig sign and Brudzinski’s sign are still being used in clinical practice. It laid the foundation for clinical medicine by emphasizing the importance of patient’s history taking and physical examination.