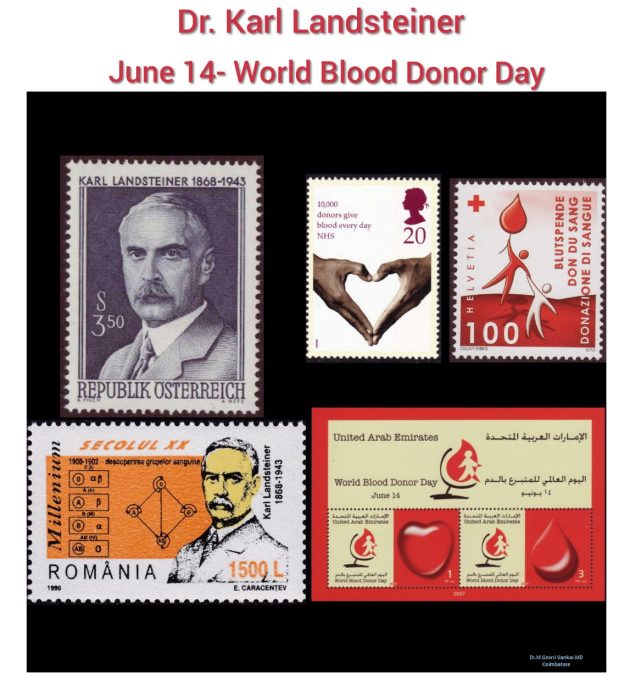 🔸Dr. Karl Landsteiner was born in a suburb of Vienna in a middle-class family. He studied medicine at the University of Vienna and graduated in the year 1891. He envisioned that the future of medicine was in research.

🔸Hence he interacted with many European scientists and got trained. Then he returned to Vienna University in 1897 and started his research in the emerging field of Immunology.

🔸At the Institute of Pathological Anatomy in Vienna, he performed nearly four thousand post-mortem examinations and published over seventy-five articles. Out of 75 articles, 55 are serological studies. He also studied the interactions between red blood cells and serum in different healthy individuals.

🔸After an extensive research, he announced his discoveries of three major blood group A, B, C (C was later called as O) in 1901. Subsequently, one of his students discovered the fourth blood group – AB – in 1902.

🔸He was the first to describe that the human blood contains different antigens and immune properties and also confirmed that blood clumping was an immunological reaction.

🔸Further, he had made another scientific breakthrough by discovering the Rh-factor in blood, which he named after Rhesus monkeys that he used for research.

🔸His ABO blood group system was quickly adopted and saved many injured soldiers of the First World War by blood transfusions.

🔸In addition, he extended his support in identifying the pathological organism causing Poliomyelitis by conducting an autopsy of a patient who died of polio and discovered that virus is responsible for the disease, not the bacteria. He also introduced dark-field microscope to identify the causative organism of Syphilis.

🔸In 1920s, he became the Emeritus Professor at the Rockefeller Institute for Medical Research in New York City, where he continued his research in immunity.

🔸In 1930, he was honoured with Nobel Prize in Medicine or Physiology for his great discovery of major Blood groups and creating the ABO blood group system.

🔸He compiled his contributions in medicine and published a book, “The Specificity of Serological Reactions” in 1936, which was a classic textbook that helped to establish the field of Immunochemistry.

🔸His birthday (June 14) was declared as World Blood Donor Day. The theme of 2022 is “Donating blood is an act of solidarity. Join the effort and save lives.”

The Dissector of Blood