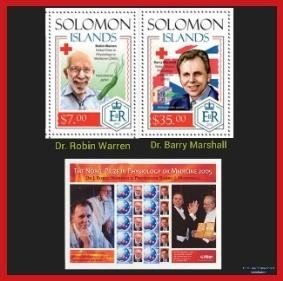 🔸Warren imbibed the love for the profession of medicine from his mother, who was a nurse. He completed his MBBS at the University of Adelaide and graduated in 1961.

🔸He then professionally got trained in Pathology at Royal Melbourne hospital in 1967 and became a Pathologist at Royal Perth Hospital. He served there until his retirement in 1999.

🔸On his birthday in 1979, he found the spiral shaped bacteria on the surface of a gastric biopsy. Subsequently, he started collecting many specimens and related those to chronic gastritis.

🔸During that time, there was a strong belief that peptic ulcers are caused only by excess gastric acid secretion. And the School of Teaching was that bacteria never survive in acidic environment of stomach. So, his reports got denied several times.

🔸In the year 1980, Dr. Warren associated with his colleague Dr. Barry Marshall, who was a Physician, to reveal the clinical significance of this bacteria.

🔸It took seven years for them to prove the causative bacteria as Helicobacter pylori by using silver stain – which is responsible for gastric ulcer.

🔸But it took more than 10 years to recognize their work in the medical community.

🔸Their work was honoured by Nobel Prize of Medicine or Physiology in 2005 for the discovery of H.pylori bacteria and its role in gastric ulcer.

🔸Their discovery also lead a breakthrough in understanding the causative link between H. pylori and gastric cancer. An Outstanding Pathologist behind the Paradigm-Shift.