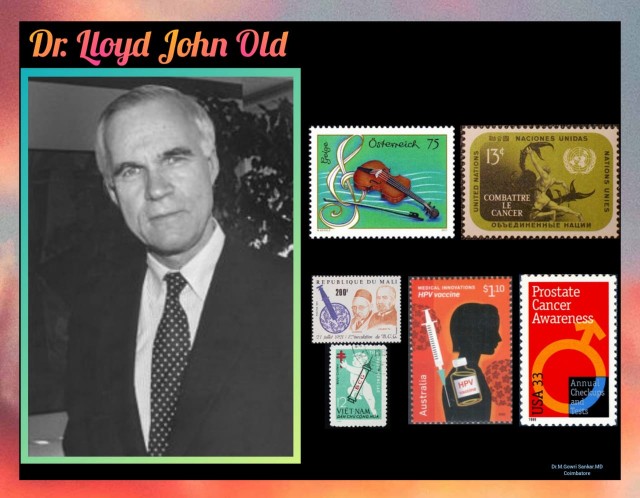 🔹Lloyd J. Old was born in San Francisco. At his young age, he was an aspiring violinist 🎻and became a concertmaster in his high school orchestra. He also studied violin in Paris from European masters.
🔹At the same time, he had a passion in science so he enrolled himself to study medicine and completed his medical degree at the University of California, San Francisco.
🔹Then he made a decision to pursue a research Fellowship at the Sloan-Kettering Institute rather than clinical practice.
🔹In fact, he was very optimistic about scientific research, especially on Tumor Immunology – even when the field was in its infancy.
🔹Initially, Dr. Lloyd Old was working in Ludwig Cancer Research, and later, he became its Director.
🔹Then he moved to Cancer Research Institute, New York as a Medical Director in 1971. Basically it’s a nonprofit organization dedicated to a cancer patient care with the support of global research in tumor immunology.
🔹He further did his extensive research and made seminal contributions in the field of oncology and recognized as one of the founder in the field of tumor immunology.
🔹His investigations:
🔅First to identify “killer T-cells” and “helper T-cells,” role in malignancies.
🔅Discovered the first linkage between the Major Histocompatibility Complex (MHC) and mouse leukemia – which opened the way for the recognition of the importance of the MHC in the immune response.
🔅First to discover the Thymus-Leukemia (TL) antigen in mice and CD8.
🔅First to introduce the drug Asparaginase as an anti-cancer agent, which is used in the treatment of acute leukemia today.
🔅His discovery of cell surface markers led to the development of a cell classification system to diagnose cancer and other illnesses based on the unique surface marker.
🔅Further, he discovered the association between Epstein Barr Virus and nasopharyngeal cancer.
🔅Additionally, discovered Tumor Necrosis Factor (TNF), a key immune signaling cytokine.
🔅Also, identified the p53 protein, the gene which is mutated in 50 percent of cancers.
🔅Furthermore, pioneered the identification and classification of Cancer-Testis antigens.
🔅Introduced the Bacille Calmette-Guerin (BCG) vaccine in experimental cancer research. Now, it has became essential and is widely used as a first line treatment for superficial bladder cancer.
🔅Afterwards, developed many Monoclonal antibodies in his laboratory, thirteen have been licensed.
🔹In 2001, Dr. Lloyd Old had led the new partnership between the Cancer Research Institute and the Ludwig Institute for Cancer Research and established the Cancer Vaccine Collaboration – A strategy for therapeutic vaccination in cancer.
🔹Moreover, he authored more than 800 research publications. As a teacher, he guided the scientific vision of several institutions and trained many generations of young scientists in the field of tumor immunology.
🔹Unfortunately, he died at his age of 78 years after several years of struggle with advanced prostate cancer.