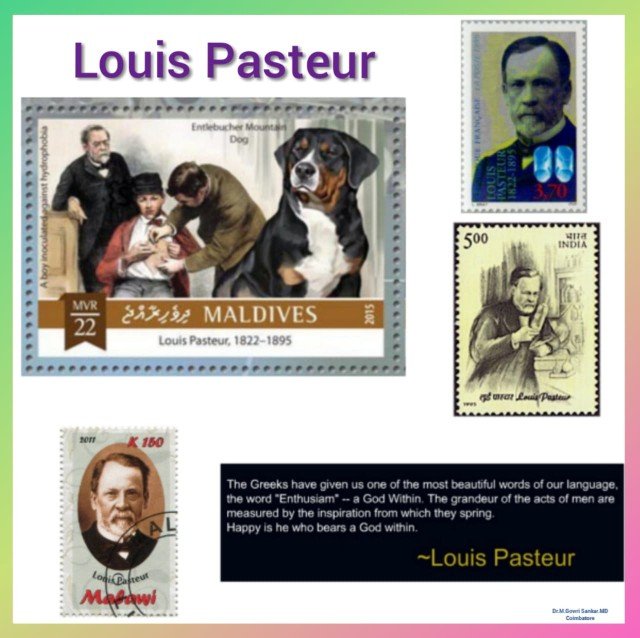 🔹Louis Pasteur had a dual degree as Bachelor of philosophy and Bachelor of science at the Royal College in Besancon, France. Then he obtained his Master of Science and later he earned his Doctorate in sciences in 1847.
🔹After his studies, he began his career as a Professor of chemistry and was then promoted up to Dean of the science faculty at the University of Lille.
🔹While on service, he was called to help in solving problems regarding alcohol production at a local distillery. Thus he began a series of studies on alcoholic fermentation.
🔹After his extensive research, he presented his experimental evidence about the participation of living organisms in all fermentative processes. Thereby, he identified a link between germs and disease.
🔹Subsequently, his evidence had risen the “Germ Theory of Fermentation.”
🔹He continued his research and discovered that the fermentation process could be arrested by passing air (oxygen) through the fermenting fluid, which is known as the Pasteur Effect.
🔹His work further led to introduce the Aerobic and Anaerobic organisms.
🔹He then proposed that the Putrefaction occurs due to specific germs that function under anaerobic conditions.
🔹To prevent contamination of wine and beer, Pasteur had used a simple procedure – he heated up the wine to 50-60°C (120-140°F).
🔹Through this heating method, he introduced the simple way of killing bacteria in liquids such as milk. His process of Pasteurisation successfully killed bacteria in milk without destroying milk protein. This was a radical discovery and made drinking milk safe. The process of Pasteurisation was named after him and it saved many lives.
🔹Further, Pasteur had paid his attention on a mysterious disease, which was attacking French silkworm nurseries. His research succeeded in saving the French silk industries.
🔹Furthermore, Pasteur had developed the overall principle of vaccination, which had led to the Foundation of lmmunology. In fact, he studied the principles of vaccination through cultures in chicken cholera.
🔹Moreover, he investigated the causes of Epidemics of Anthrax in European continent, which was challenging and killing large number of sheeps as well as humans in that period.
🔹During that time German Physician Dr. Robert Koch had announced about the isolation of the Anthrax bacillus, which was confirmed by Pasteur.
🔹By applying the principle of vaccination to anthrax, he succeed in anthrax immunization experiment.
🔹He also focused on dreaded disease Rabies. Almost 90 years ago Edward Jenner’s had initiated the immunization against  smallpox, whereas Pasteur had developed another vaccine, which became the first vaccine against Rabies.
🔹On July 6, 1885, Pasteur succeed in vaccinating a nine-year-old boy who had been bitten by a rabid dog. His life was saved. That was the time “An era of  Preventive Medicine had began.”
🔹By his experience, Pasteur stated ….
🔅“An individual who gets used to hard work can thereafter never live without it. Work is the foundation of everything in this world.”
🔅“Chance only favours the prepared mind.”

🔹Every year September 28th, his death anniversary, is observed worldwide as World Rabies Day to create awareness of dog bites and the importance of Rabies vaccination.

The Father of Microbiology