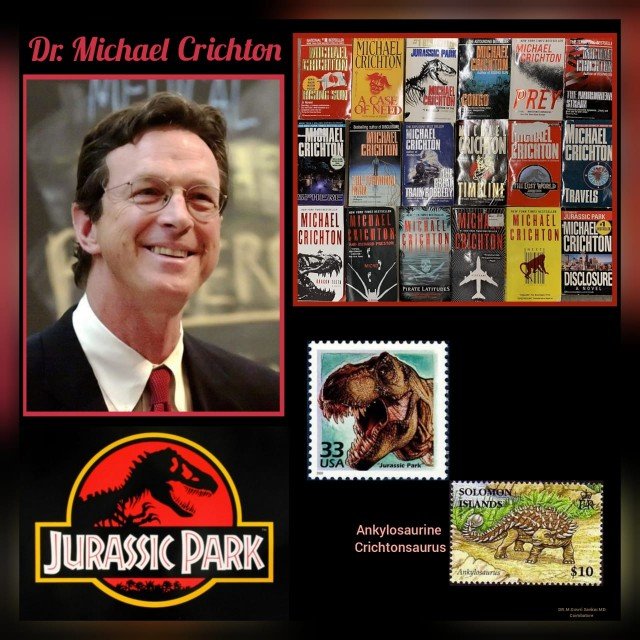 Welcome to the World of Dr. Michael Crichton

🔹Crichton’s father was a journalist, who used to encourage him to write short stories to magazines. So he initially wrote about his family vacation as a nice travel experience and sent it to the New York Times at his young age of 14 years.
🔹At the same time, Crichton had a great passion for medicine. Hence, he studied medicine and received his MD from Harvard Medical School in 1969.
🔹Simultaneously, he was writing and published his books and novels under the pseudonyms. Also, one of his book “A Case of Need,” won the Edgar Award for Best Mystery in the year 1969.
🔹After completion of his medical studies, he did his Postdoctoral Fellow at the Salk Institute for Biological Studies in 1970.
🔹However, Dr. Crichton never practiced medicine rather he involved himself in writing and filmmaking.
🔹In fact, his first novel called “The Andromeda Strain” was published in 1969 while he was a medical student. Moreover, that book became an international best-seller.
🔹Subsequently, he published more than 40 fiction and non-fiction books and novels.
🔹Apart from all that, Crichton has directed seven films. Those are Westworld, Coma, The Great Train Robbery, Looker, Runaway and Physical Evidence.
🔹Actually, Dr. Crichton became well-known for his science fiction and medical thrillers. In 1990, he successfully released his world famous novel “Jurassic Park,” which is about a theme park where dinosaurs are created by using genetic engineering.
🔹Consequently, Dr. Crichton’s name skyrockted to popularity in the 1990. Thereupon Director Steven Spielberg turned his book Jurassic Park into one of the highest-grossing film of all time. Thereafter, his another book The Lost World, was also turned to a film by Spielberg in 1997.
🔹Additionally, Dr. Crichton had created “ER,” the long-running medical TV drama. The show was telecasted on NBC channel for about 15 seasons from 1994 to 2009.
🔹Furthermore, Dr. Michael Crichton’s books have been translated to more than 36 languages. Most of his themes were related to medical, scientific disaster and environmental destruction.
🔹In 1994, his fabulous presentations enabled him to achieve the unique distinction of having a No.1 movie – Jurassic Park, No.1 TV show – ER & No.1 book – Disclosure.
🔹Dr. Crichton was also honored with several awards. The dinosaur specialist Dong Zhiming named a genus of “Ankylosaurine Crichtonsaurus bohlini” in honor of the author.
🔹Finally Dr. Crichton declared… “For a person like me, this is much better than an Academy Award.”
🔹Basically, he was a true original thinker, a man with many talents, and a fantastic writer, who sold around 150 million books during his life time.
🔹In fact, Dr. Crichton was the one who created a new world with the credits of dinosaurs again walking in the earth. Also, he climbed the top of Mount Everest. Unfortunately, he died at the age of 66 in a battle against lymphoma.

A Physician Who Entertained the World