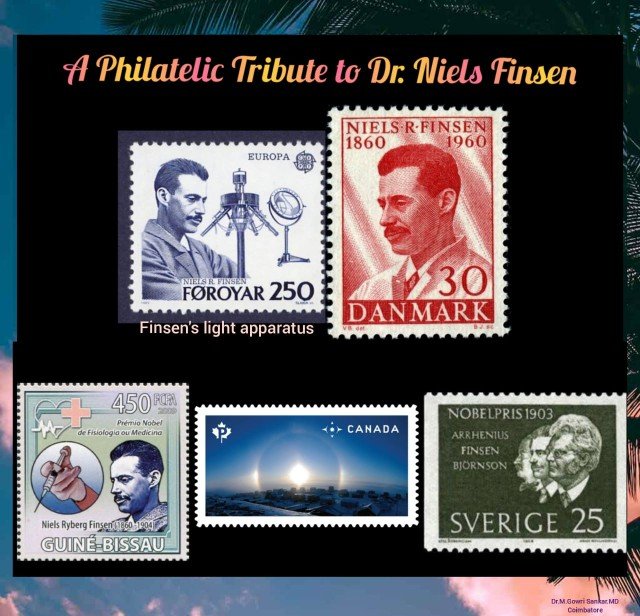 🔹Niels Finsen was born in Faroe Islands in the North Atlantic Ocean. His parents belonged to a traditional Icelandic family.
🔹At the age of four years, sadly, he lost his mother and throughout his life, he faced many setbacks.
🔹After his high school, Finsen moved to Copenhagen, Denmark to study medicine at the University of Copenhagen and graduated in 1890.
🔹Subsequent to his studies, he became a prosector of anatomy at the same university and later got his professorship.
🔹In the early 20s, he unfortunately, suffered from Niemann-Pick disease. Due to his illness, he was confined in a wheelchair and continued his work from wheelchair.
🔹In fact, he experienced strength and stamina, whenever he moved outside or was exposed to sunlight. So he started his research work on the effects of ultraviolet rays and infrared rays of sunlight.
🔹Dr. Finsen is best known for his Theory of Phototherapy. By his investigation, he found that certain wavelengths of light can have beneficial medical effects. Then he devoted himself to the work related to light.
🔹He went on to prove that exposure to specific wavelengths of light can treat skin lesions like small pox and neonatal jaundice.
🔹Simultaneously, he developed a lamp based on electric carbon arcs known as the Finsen light which was used for skin therapy. He also founded the Medical Light Institute (now the Finsen Institute) in Copenhagen to extend his studies.
🔹Actually, carbon arc treatment (Finsen’s Therapy) of lupus vulgaris was a great breakthrough and brought him world recognition. Moreover, it revolutionized and opened a new avenue in medical field.
🔹Further, his marvelous contribution of Phototherapy in the treatment of Lupus vulgaris earned him the prestigious Nobel Prize in Medicine in 1903.
🔹He was the first Scandinavian to win the prize and he is the only Faroese Nobel Laureate to date. He also donated his full prize money for research.
🔹Due to Niemann-Pick disease, he developed cardiac cirrhosis. He suffered for many years, was wheel chair bound and died at the age of 44 years.
🔹In order to honor his fabulous work, the Finsen Laboratory at Copenhagen University Hospital was given his name. A memorial by the name of Towards the Light was installed in Copenhagen for his discovery of the therapeutic effects of sunlight🌞.