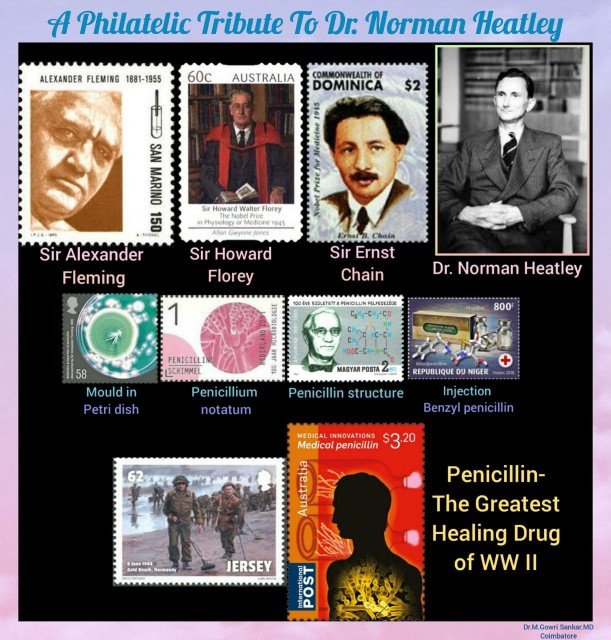 🔹Norman Heatley had done his graduation in Natural Sciences in 1933 at St John’s College, Cambridge and completed his Ph.D. in Biochemistry.
🔹As soon as he completed his studies, he got an opportunity from Oxford University to work under the dynamic Australian Pathologist Prof. Howard Florey and British Biochemist Dr. Ernst Chain.
🔸 The Story of Penicillin…
🔹In the beginning, a Scottish Physician Dr. Alexander Fleming, was investigating the properties of Staphylococcus at St Mary’s Hospital laboratory, London.
🔹On September 3, 1928 after returning from his August vacation, Dr. Fleming found that one of the Petri dish containing staphylococcus was unknowingly left open and got contaminated with fungus.
🔹He further observed that colonies of staphylococcus immediately surrounding the fungus were destroyed. Whereas, the colonies farther away were normal. Thereby Dr. Fleming had remarked as “That’s Funny”.
🔹He then identified the fungus as Penicillium notatum and named the mould juice as “Penicillin” on March 7, 1929.
🔹Furthermore, he investigated its anti-bacterial properties in many organisms and published his discovery in British Journal of Experimental Pathology in 1929. But only little attention was paid towards the article.
🔹After 10 years of penicillin discovery, a team of Oxford University Scientists started developing Penicillin. Thereupon, Dr. Ernst Chain studied and proposed the molecular structure of penicillin.
🔹Meanwhile, Dr. Heatley developed a multi-stage technique to isolate penicillin from culture fluid and used back-extraction technique for efficient purification.
🔹By the guidance of Prof. Howard Florey, Dr. Heatley also succeeded his animal trials on mice🐀.
🔹Subsequently in 1940, Dr. Florey and Dr. Heatley had heard about a 43 years old Police Constable named Albert Alexander who was succumbing to septicemia. Hence, they brought him to treat with penicillin – this was the first human trial. Finally, they succeeded and proved the efficacy of penicillin.
🔹Afterwards, both Dr. Heatley and Dr. Florey travelled to the United States in 1941 and worked with an American microbiologist Dr. A. J. Moyer, who was supported for mass production of penicillin.
🔹Consequently, thousands of wounded soldiers got saved in Second World War by the wide scale use of penicillin.
🔹Finally, Sir Alexander Fleming, Sir Ernest Chain and Sir Howard Florey were jointly honoured with Nobel Prize in Physiology or Medicine in 1945 for the development of Penicillin.
🔹Whereas, Dr. Heatley’s contribution was not properly recognized. After a long gap, he was called upon to receive the unusual distinction of an Honorary Doctorate of Medicine award from Oxford University, which was the first one given to a non-medic in Oxford’s 800-years history.
🔹In fact, there are well known lines that describe Dr. Heatley in the creation of Penicillin…. “Without Fleming, no Chain or Florey; without Florey, no Heatley; without Heatley, no Penicillin.”